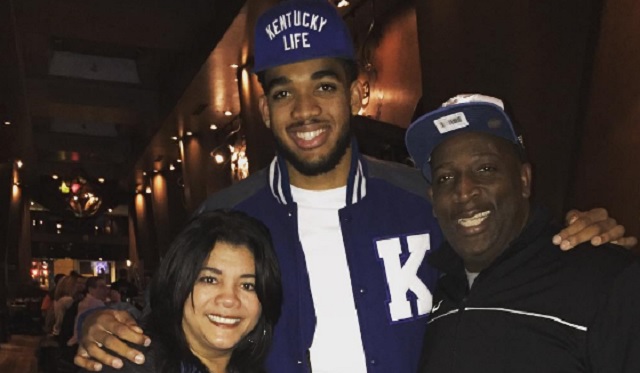 The father of Timberwolves star Karl-Anthony Towns is considering suing the team after their mascot, Crunch, crashed into him in a stunt gone wrong.

Towns Sr. claims he suffered a serious knee injury during a sliding stunt involving ‘Crunch’ at a game in late January

The Timberwolves’ prophetically named mascot, Crunch, appeared to lose balance towards the end of a high-speed sledding stunt and hit an empty front row seat next to the aisle. That seat, in turn, crashed into the right knee of Towns Sr., who was sitting next to the empty seat. The elder Towns is now exploring potential legal options, including the possibility of suing his son’s team for negligence.

According to Michael MCcann of Sports Illustrated, the Timberwolves are likely to settle out of court instead of getting into a dispute with the father of their franchise player.

The most likely scenario is that Towns Sr. and interested parties, most notably the Timberwolves, resolve the matter out of court. They could do so through mediation, where a neutral mediator would review the dispute and proposes a settlement that, if all parties accept, would end the matter. The reality is that the Timberwolves do not want to litigate against the father of the team’s franchise player—such a move would obviously damage the team’s chances at keeping Towns Jr. for the long haul. It stands to reason that a deal could be had long before anyone appears in court.