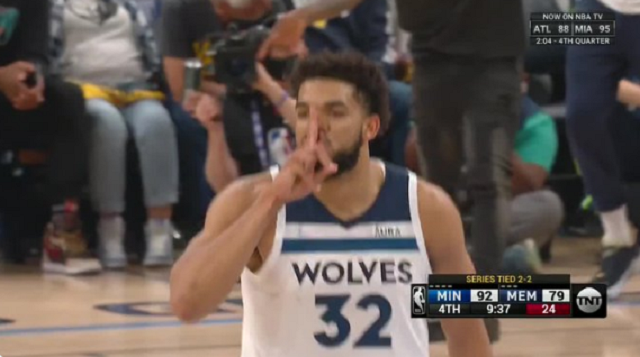 Karl-Anthony Towns might want to stop talking trash when his team has a big lead this postseason.

Just a few days ago, KAT was seen telling the Grizzlies, “we in Minnesota now,” before his team blew a 26-point lead.

KAT during a Grizzlies timeout. “WE IN MINNESOTA NOW”

On Tuesday night, KAT decided to hush the crowd while up 13 points with 9 minutes left in the game in the fourth quarter.

KAT hushed the crowd after this triple 🤫 pic.twitter.com/SijAAaYvqR

Unfortunately for KAT, the Grizzlies were able to rally back into the game, and Ja Morant hit the game-winning shot in game 5.

Of course, KAT was mocked for talking trash again while up big and losing.

KAT been talking shit just for it to blow up in his face all series. That's that Pat Bev influence. He learned from the best (worst) https://t.co/QhJDNjlzUk

KAT is like 0-50 after talking trash with a big lead https://t.co/7jnOxnphXY

KAT needs to just shut up and play. Every time he showboats they lose in embarrassing ways https://t.co/Lem40HCMkZ

Doing this with 9 mins left after you've already blown a double digit 4th quarter lead in this series is wild lol https://t.co/GNUaKHyGv3