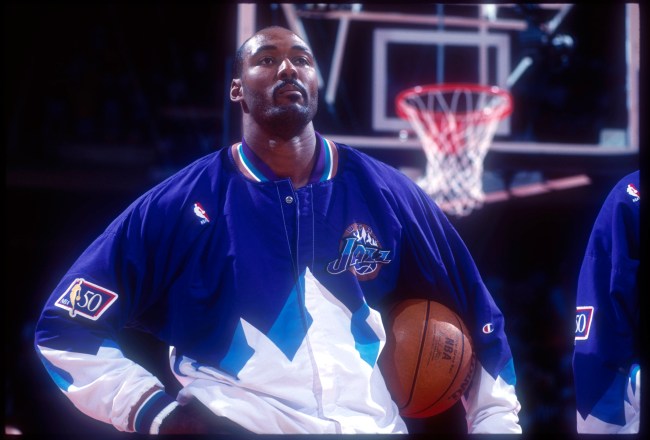 Karl Malone is an extremely controversial figure within the NBA community and whenever he makes an appearance fans come out of the woodwork to blast him.

For those who don’t know, Malone is the father of former NFL player Demetrius Bell. When he was a 20-year-old sophomore at Louisiana Tech Malone reportedly impregnated Bell’s mother who was 13 at the time and then refused to pay child support for many years until settling out of court.

Malone reportedly impregnated Bell’s mother when she was 13 and he was a sophomore at Louisiana Tech.

It would be one thing if Malone was unable to financially provide for his son, but he made more than $100 million during his NBA career.

The Salt Lake (Utah) Tribune reported that when Bell’s grandparents initially took Malone to court for paternity in 1986, his second year with the Jazz, they requested Malone pay $200 a week.

Malone didn’t respond to the suit, but a Louisiana judge ruled he was Bell’s father — after a paternity test showed that was indeed accurate — and ordered Malone to pay $125 a week, plus past and future medical expenses. Malone claimed that was too much and later reached a confidential out-of-court settlement with Bell’s family between 1988 and 1989.”

On Tuesday night, Malone went on the Knuckleheads podcast and criticized Zion Williamson over his conditioning and not playing enough minutes despite being young.

Karl Malone says Zion Williamson needs to get into shape

Malone then became the top trending topic on Twitter after fans blasted him over his shady past.

What do I think about Karl Malone's comments about Zion?

I think he should be R. Kelly's cellmate

You what’s disturbing? How the media just welcomes Karl Malone like he did absolutely nothing wrong in his life, it’s disgusting.

Karl Malone don’t need to be commenting on anybody kids, or kids at all for that matter. https://t.co/fxJpaG8xnW

Karl Malone, as always, should stop worrying about people who are half his age https://t.co/3RSpOiZJCP

Karl Malone and “Kid” shouldn’t be in the same sentence https://t.co/otQc6e4rXt

Karl Malone is a horrible horrible person. Look it up https://t.co/vtvOloiyad