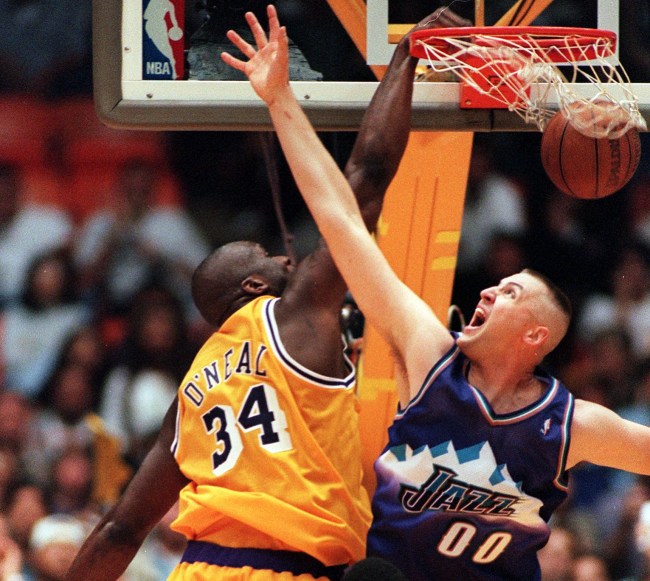 Former Utah Jazz great Karl Malone knows a thing or two about completely dominating opponents. After all, the 19-year vet and Basketball Hall of Famer was nicknamed “The Mailman” for a reason; because he pretty much always delivered. It’s why Malone finished his career with the second-most points in NBA history, trailing only Kareem Abdul-Jabbar in that category.

While Malone never won the big one — although he did play in three NBA Finals’ — the guy was a beast down low. Seriously, just look at how thicc the dude was and ask yourself who wanted to actually match up with that each night? The guy resembled an NFL defensive lineman more than a power forward.

But there was one guy who was even more dominant than Karl Malone was during the ’90s and early-2000s, and he just so happened to be the most feared man in the NBA at one point. His name? Shaquille O’Neal.

Known to rip off rims and even pull down the entire basket, Shaq was a force of nature who was not to be messed with. That dominance helped get the guy four championships during his time in the league, and why he’s mentioned as being one of the most supreme offensive players of all-time. But Shaq’s intimidation was more than just what he accomplished on the court, because, according to Karl Malone, the dude once ruined the career of one of Malone’s former Jazz teammates, Greg Ostertag.

While talking in a roundtable discussion following The Last Dance series the other day, Malone described Shaq as someone who permanently “fucked up” Ostertag’s career after an altercation prior to a game. Take a look below at what “The Mailman” had to say.

Karl Malone tells the story of when Shaquille O’Neal “f**ked up Greg Ostertag for the rest of his life”. pic.twitter.com/D0xdtb0Kmy

That’s when Karl Malone, who featured heavily in the final two episodes of “The Last Dance,” recalled how Shaquille O’Neal “fucked Greg Ostertag up for the rest of his life.” That was retribution after Ostertag — who is 7-2, 280 pounds, by the way — “started yacking” the previous year as Utah blanked Los Angeles 4-0 in Western Conference finals.

As Malone tells it, O’Neal approached Malone before the game and said, “‘Hey, if I see that motherfucker I’m going to slap the shit out of him.’ And he is not lying. We’re waiting on (Ostertag) to come out for the preseason, on the shootaround, and Shaq walked right to him. ‘Man, I told you to quit talking that shit.’

“Before we could even respond, Ostertag’s on the ground looking for his contact. It ruined him for the rest of our career.”

Good grief, O’Neal straight up bullied Ostertag, and it was in front of Karl Malone and his other Jazz teammates. Even soft-spoken John Stockton — the NBA’s leader in assists — validated Malone’s story during the roundtable, which included Shaq. Talk about an embarrassing moment for Ostertag, huh?

What’s crazier is that, after Malone told Ostertag to “go hit him [O’Neal] or something,” he even said he’d pay his fine for retaliating. The big man never did go at Shaq, though, and, whether true or not, this incident may have absolutely ruined his career. Can’t back down after being so disrespected, man.