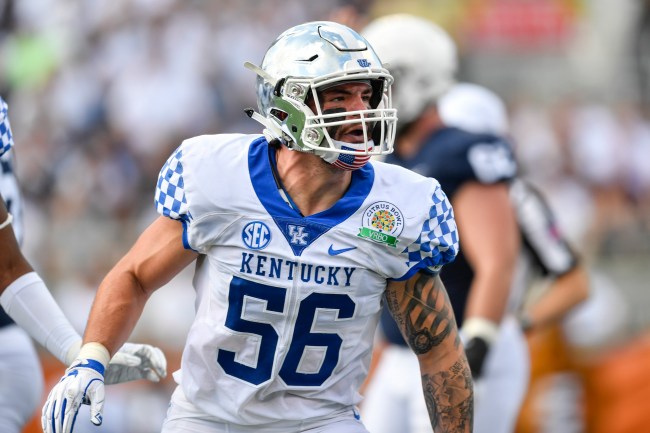 If there was any doubt Kentucky junior linebacker Kash Daniel tried to snap the ankle of Florida quarterback Kyle Trask during a failed two-point conversion in a Gators’ wild comeback 29-21 win Saturday, new video footage has been released to eliminate that doubt.

Here is the Skycam angle of the play that shows Trask emerge from the pile and immediately get in the face of the 6-foot-1, 220 pounds Daniel, who delivers some choice words of his own.

Maybe I'm just a big ol homer, but the Skycam angle makes it pretty clear to my eyes that @TateCasey84 was correct and @UKFootball's #56 Kash Daniels was working @GatorsFB's Kyle Trask's ankle – released it when he realized the ref was on top of them pic.twitter.com/06asJVQYi5

Shout out to @WYMT for the sideline angle – much clearer than ESPN's Skycam. Full piece from WYMT threaded pic.twitter.com/hP7sX8Bmd9

Reporters asked Daniel about the dirty play after the sideline footage began making the rounds on social media.

Kash Daniels comments back on allegations of him making a dirty play against Florida’s QB.

“Pulled my hand out there last second, because I just pulled it out. I got it stuck underneath a lineman’s leg with all that weight on it. Then I pulled it free from that, kept moving stuff, kept hitting legs and stuff, and finally came through. Maybe he felt something weird, I don’t know, but I’m not out there to twist nobody’s ankle, hurt nobody. End of story.”

Daniel is a huge WWE fan and even said that if football doesn’t work out, he would consider a career in professional wrestling. lt looks like he’s already bolstering his resume.

Kash Daniel is the Grayson Allen of college football.

Kash Daniel when he sees a Gator QB’s ankles: pic.twitter.com/bAusBPBeRy

Unfortunately for Kash, he couldn’t secure the victory over Florida this year to replicate his Stone Cold Steve Austin role play from last season’s historic 27-16 win.

What goes around comes around, I guess.