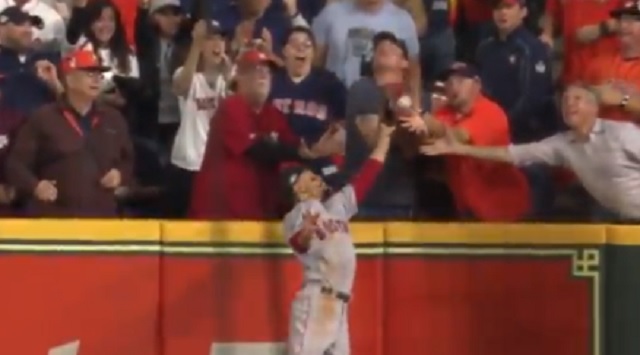 There was a bit of controversy in tonight’s game 4 of the ALCS between the Red Sox and the Astros.

In the bottom of the first inning it appeared appeared that Jose Altuve hit a two-run homer to tie the game, but unfortunately the HR was overturned by replay review when he was called out due to fan interference.

That would have been an INSANE catch from Mookie Betts. pic.twitter.com/3EdbzyBJb2

While opinions on the call are divided online, Justin Verlander’s wife Kate Upton was not happy with the ruling and she let the MLB know about it on Twitter.

So if a player is IN the stands fans are suppose to move over? If those are the rules MLB shouldn’t let fans sit there. They didn’t reach over the fence. @MLB

Glad you asked. The last paragraph clearly states “No interference shall be allowed when a player reaches over a fence”. So no. The fans had every right at that ball pic.twitter.com/W8at5BULGV

Apparently trolls began taking shots at Upton and she fired back.

I feel the need to acknowledge & address the amount of people who have called me “princess”, “honey” or a terrible “girl” sports fan. Just because I have an opinion on the call doesn’t give you the right to be degrading & disrespectful because I’m a woman.