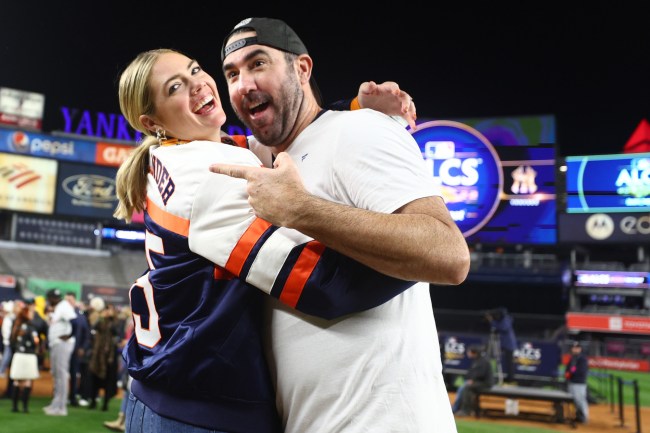 Kate Upton has a lot to be proud of when it comes to her husband, Houston Astros pitcher Justin Verlander.

After a dominating ALCS performance against the New York Yankees, Justin Verlander is back in the World Series. It’s his fifth career World Series; his third appearance in an Astros uniform.

Verlander will be on the mound for Game 1 against the Phillies. Aaron Nola is slated to pitch for the Phillies.

At 39 years old, Verlander’s distinguished resume has just about everything except a great World Series game. In his seven career World Series starts, the Astros ace is 0-6. In those starts, he has a 5.68 ERA and 9 home runs allowed.

A good sign for the Phillies? Yes. But also a big career moment for the future Hall Of Famer.

The pressure is on at Minute Maid Park. Verlander facing a red-hot Phillies team that’s being called “America’s Team” by Philadelphia sports radio.

Kate Upton and Jason Verlander reportedly met and started dating in 2013. The two married in Tuscany in 2017, just days after Verlander won the World Series with the Astros following a blockbuster late season trade.

Before Game 1 of the 2022 World Series, Upton congratulated her husband on Instagram for the his trip back to baseball’s biggest stage.

“I’m so proud of you @justinverlander… ASTROS ARE GOING TO THE WORLD SERIES!!!”, the former Sports Illustrated Swimsuit model shared.

The Instagram video featured the couple in a warm embrace after the Astros punched their ticket to the MLB championship.

In the video, Upton is pictured wearing a vintage Houston Astros jacket by Mitchell & Ness. The supermodel’s custom jacket was a hit with Astros fans, quickly selling out after the ALCS win.

Mitchell & Ness is reportedly rush ordering a restock to keep up with demand.

That Kate Upton #Astros jacket about to be a best seller. #LevelUp pic.twitter.com/BlC6LKUgbk

Will the stars align for Verlander as they did in 2017?

Or will the Phils just keep dancing on their own, led by a championship-hungry Bryce Harper, Rhys Hoskins, and a Kyle Schwarber?

Either way, the stage is certainly set for a great show.