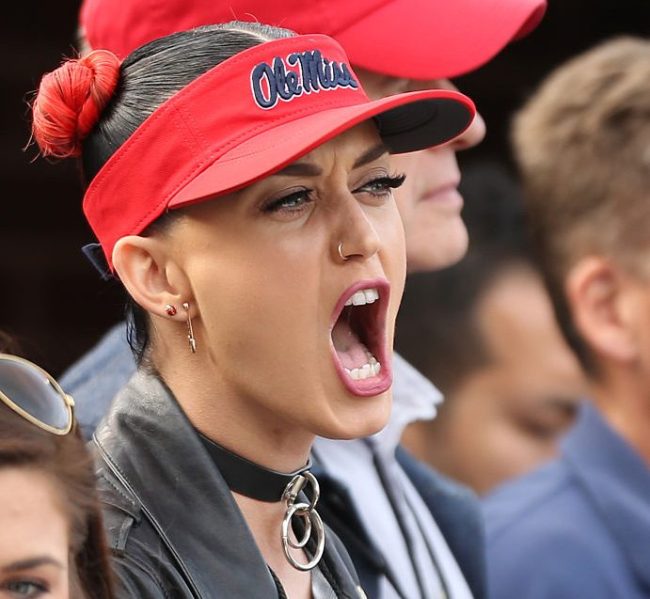 In case you were not aware, Katy Perry is a huge Ole Miss fan and she’s not afraid to show it. There was that one time she wore an Alabama jersey to troll Luke Bryan on American Idol, but we don’t like to talk about that.

The superstar pop icon tweeted in response to the school’s head football coach Lane Kiffin’s invitation to their game this weekend and voiced her support. She is all aboard the Lane Train and is pulling for quarterback Matt Corral to win the Heisman Trophy.

The relationship between the Rebels and the 36-year-old pop star began in 2014 when Oxford played host to the Crimson Tide. College Gameday was in town, Lee Corso was wearing a seersucker suit and Perry was the game’s guest picker.

Her manager, Bradford Cobb, was a 1996 graduate and got her on board with Ole Miss. Perry was, undeniably and completely unbiasedly, the best Gameday picker of all-time.

It was her first college football game, she showed up with drinks for the entire crew and hit on Oklahoma’s quarterback Trevor Knight. She also fired shots at multiple schools. It was incredible.

Of those shots fired, she pulled out a plate of corndogs when Chris Fowler referenced LSU. The running joke amongst SEC message boards is that Baton Rouge, where LSU is located, smells like corn dogs.

Perry played into the joke perfectly and thus, Kiffin offered to buy her corndogs to come back for the team’s season opener on Saturday.

Katy Perry is forever a legend in Oxford.

After Perry’s appearance on College Gameday, the Rebels upset Nick Saban and the No. 1 Crimson Tide for the first time in back-to-back years. We stormed the field and tore down the goalposts.

And then we carried them to the bars.

It was the greatest weekend in Ole Miss football history and Perry was a crucial part of it. She went to Funky’s (the best bar in Oxford) to celebrate and was stage diving off of the bar.

Now, because of her time at the legendary daiquiri bar plaster bust of her chest hangs on the wall. For real.

Katy Perry is forever ingrained into Ole Miss folklore and now she’s all aboard the Lane Train.