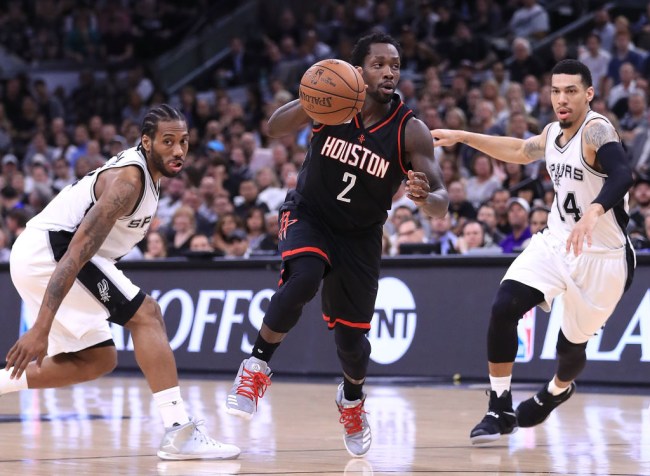 Much of the drama between Kawhi Leonard and The Spurs last season stemmed from the fact that Leonard got some push back from the organization when he wanted to seek a second opinion because he believed the team’s doctors had misdiagnosed his injuries.

Despite being eligible to receive a five-year super max extension this summer worth $221 million from the Spurs, Leonard wanted out of San Antonio for myriad reasons. He felt betrayed by the team for the handling of the quadriceps injury that kept him out of all but nine games last season — plus, Leonard’s camp believes the Spurs misdiagnosed a 2014 wrist injury as well — and also for the resistance encountered from the franchise when seeking outside opinions. Not to mention what seemed to be public questioning of the situation by members of the organization, with sources saying the forward had been medically cleared to play since December.

During his podcast yesterday, Danny Green revealed that he may have played much of the season with a groin tear that went undetected by the Spurs medical staff. Green didn’t put the blame on the medical staff but he says he understand why Leonard would have wanted to get a second opinion.

Via Inside The Green Room with Danny Green.

December came around and we played Boston, we won the game but I strained my groin first half trying to chase down and block a dunk, we do the rehab everything we’re supposed to do…with a groin strain it’s hard to tell if it’s a strain or a sports hernia. After some time it healed I tried to play again and certain days I had bad days, some days would be good, my agent was like maybe you should get a second opinion. I didn’t want to because I had full faith and belief in the Spurs staff. They’ve always done right by me, they’ve always done a hell of a job.

At the end of the season I had to get another MRI for the exit physicals and the strain was now a full tear so since then I’ve been rehabbing it and I passed that information to Toronto but we don’t know how long I’ve been playing with strain or when the tear happened because we hadn’t been focused on it that much because of all the injuries that had been happening throughout the season.

It seems like Green’s revelation gives a bit of clarity as to why Leonard was so dissatisfied with how the Spurs handled his injury but Kawhi still has come out and eventually speak about his beef with the Spurs in public.