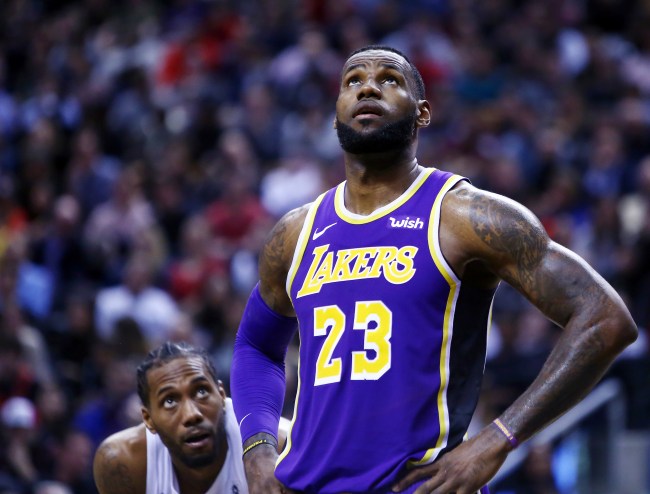 After acquiring Anthony Davis over the weekend the Lakers are going to make a strong push to sign Kawhi Leonard and it appears that the Raptors superstar may be interested.

According to Former NBA player/assistant coach Damon Jones, someone in Leonard’s camp told him that the Lakers are going to be “in play” if they can free up enough cap space to sign him.

"Kawhi Leonard is now in play for the Lakers."

–@D19J says after having a conversation with someone close to the situation, it's a possibility. pic.twitter.com/MOoRHMpj78

After the AD trade on Saturday, I had a conversation with somebody that’s close to the situation that said Kawhi Leonard is now in play for the Lakers,” “Now there’s a lot of things that have to happen. The Lakers have to clear the cap space, although Kawhi Leonard right now is still contemplating if he’s going to go back to Toronto. And if he does that, it’d be on a shorter deal.”

FS1’s Cris Carter also went on to report that Kawhi would consider the Lakers during free agency but that the Raptors were still the favorites to re-sign him this offseason.

.@criscarter80 reports that Kawhi Leonard will consider the Lakers, Clippers, Raptors, Knicks and Nets in free agency, with Toronto as the current favorite. pic.twitter.com/JotbqLNF8H

Unfortunately, the Lakers might not have enough cap space to sign Kawhi or another superstar to the team.

Bobby Marks on now. Saying Davis IS NOT waiving $4M trade bonus. Lakers OUT of running for Kemba Walker and Kyrie Irving. pic.twitter.com/3SyQKsI0R3