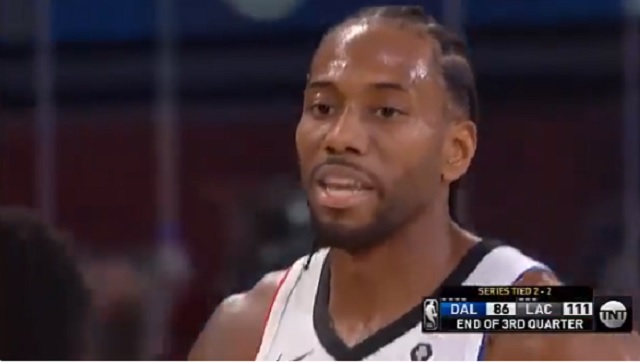 Kawhi Leonard has a reputation for being stoic and emotionless on the court but teammate Reggie Jackson says the Clippers superstar is actually a funny guy when you get to know him.

While speaking to the media last month Jackson described how outgoing Kawhi is in private to his teammates.

Kawhi has a lot more personality than I think people give him credit for,” . “I think you just have to be his teammate or be close to him. But the guy is amazing. He’s funny. He’s outgoing. He is who he is. I don’t think a lot of people get to see who he is, and it’s unfortunate for them.”

During game 5 of the Clippers-Mavs series, Kawhi showed off a bit of that funny personality Jackson was talking about.

Late in the third quarter, Kawhi hilariously yelled “I didn’t give up the ball for that shit” after passing the ball to Jackson, who proceeded to turn it over while running up the court.

Kawhi hates Reggie Jackson "I didn't give up the ball for that shit" 😂😂 pic.twitter.com/DOLsLgpLy2

Me and Michael watching Kawhi tell Reggie Jackson he “didn’t give the ball up for that shit.” after turning it over last night. pic.twitter.com/tA6outzUrK