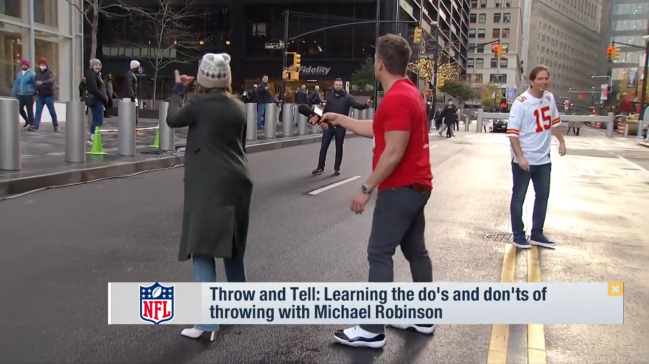 There are very few shows on television that are as awesome as ‘Good Morning Football.’ Over the past five years, there has hardly been a morning in which I did not wake up and turn on NFL Network. I start almost every single day with (my former officemate) Peter Schrager, Kyle Brandt, and Kay Adams.

This morning, however, was not one of them. I was unable to have the show on live, so when I stumbled upon these clips, I could not stop laughing.

Here is how it went down:

During Thursday’s episode of Good Morning Football, Adams, Brandt, Schrager and Michael Robinson took to the streets. During the segment, which was supposed to be about playing some “backyard football,” Adams had a leash in hand.

On the other end of the leash, was a large Bernese Mountain puppy named Gunner— or, Gunnar. No matter how the good doggo’s name is spelled, he just wanted to get in on the action.

When the segment began, Gunner/Gunnar started pulling Adams in every which direction. She tried to keep him under control but nearly got dragged off.

However, that didn’t stop her from being an absolute pro and standing tall in the pocket.

A few minutes later, with the pup back in different hands, Adams had one of the funniest moments in the show’s history. The segment had to do with the proper way to throw a football.

As Adams went to throw a (semi) perfect spiral, there was a guy on the sidewalk watching. She immediately went for the jugular and chirped him into oblivion.

“What are you looking at?! You think you’re better than me? That guy going to his finance job— come out here! You can’t do better than me! Go crunch your numbers, bro!”

DO NOT mess with @heykayadams when she's got a football in her hands 😤 pic.twitter.com/waUrWuYpsb

Adams, in full New York style, absolutely eviscerated the finance bro and Schrager cracking up in the background is gold. It was an absolutely hilarious segment and served as a great example of why it is the best morning show (if not sports show all together) on television.