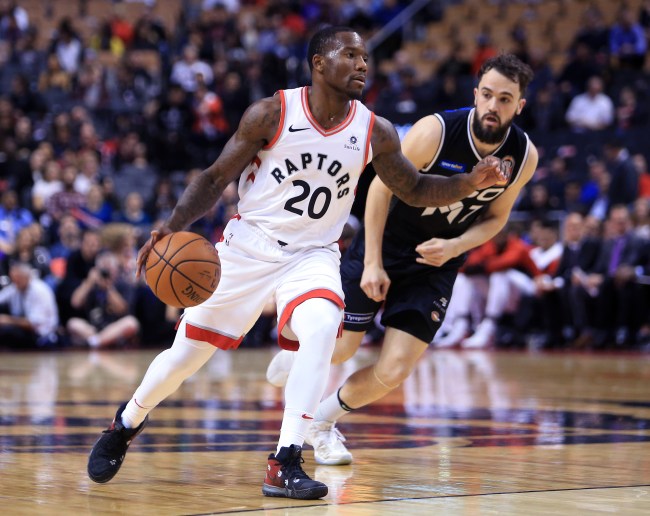 Kay Felder, a second-round pick of the Atlanta Hawks in 2016, was arrested Monday morning after allegedly choking out and assaulting a woman, who claims that the 5’9″ guard got violent and threatened her during a night out, according to TMZ Sports, via Total Pro Sports. Demoted to the G-league back in October by the Toronto Raptors, the allegations have already led to his current team, the Raptors 905, releasing him.

The TMZ report give grizzly details about the alleged incident, with the alleged victim claiming to have known Kay Felder for years.

“Cops wouldn’t confirm the identity of the accuser but multiple sources connected to the incident tell us the alleged victim is a woman who has known Felder for years.

We’re told the two got into an argument after dinner and Felder allegedly got violent and choked her, leaving nasty marks on her neck. Our sources say the alleged victim was able to call a family member who then called police.

We’re told paramedics responded to the scene and treated the alleged victim.

Law enforcement confirms Felder was booked for assault and utter threats. He’s been released from custody and is due back in court later this month.”

Felder, who was a former standout point guard for Oakland University and is the school’s all-time assist leader, has bounced between various NBA teams and the G-league since being drafted. The arrest prompted the Raptors franchise to not only act quickly by cutting him, but addressing the situation by releasing a statement.

“On Monday, Dec. 3, 2018, Raptors 905 guard Kay Felder was charged by police in connection with an allegation of domestic violence. Raptors 905 have waived Felder, effective immediately.

“As this matter is before the courts, Raptors 905 will not comment further,” the statement read.

While Kay Felder has yet to comment on the situation since the news broke, it will be interesting to see his remarks, as former Kansas City Chiefs running back, Kareem Hunt, found himself in a similar situation just a few days ago. Hunt’s first interview about the disgusting video that surfaced was criticized by many.

Felder has bigger issues to deal with now, but his NBA future looks grim following these allegations.