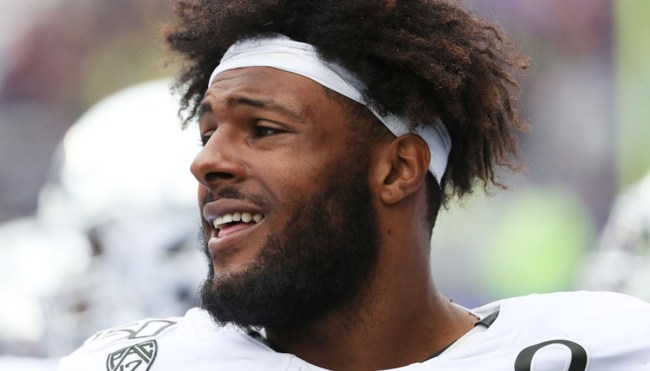 It’s not exactly a secret that a lot of student-athletes put the emphasis on the “athlete” part during their time playing sports in college—like former Ohio State quarterback Cardale Jones, who summed up his thoughts on the academic aspect of his enrollment at the school in a tweet for the ages he sent out in 2012.

It’s equally well-known that plenty of college programs are more than willing to convince the admissions office to relax their standards when it comes to examining the applications of star recruits who probably wouldn’t get in on grades alone. There’s plenty of data to back that up, as a 2009 study showed that players on close to 30 FBS teams we’re 10 times more likely to receive a “special admission” compared to the rest of the student population.

You probably won’t be shocked to discover Alabama was one of those institutions, as Nick Saban has never really been shy about acknowledging the fact that the Crimson Tide don’t take the same approach as the Ivy League when it comes to vetting. That’s not to say you can’t get a solid education if you’re pursuing a degree at Alabama, but if you’re someone who is concerned about playing school, there are plenty of other places that offer a slightly more rigorous path to a degree.

Earlier this week, Oregon defensive end Kayvon Thibodeaux revealed that factor played a role in his decision to take his talents to Eugene as opposed to Tuscaloosa while chatting with Joel Klatt, saying part of the reason he decided to play for the Ducks was to set himself up for a brighter future (thanks in no small part to the school’s relationship with Nike).

Thibodeaux made a fairly valid point—especially when you consider U.S. News and World Report lists Oregon as the 47th-best public university in the country while placing Alabama at #67—but he didn’t do himself any favors when he elaborated on his thoughts and took aim at the Crimson Tide by saying:

If you’re fairly familiar with the English language or have a certain eye condition, you’re probably aware Thibodeaux repeatedly and erroneously deployed “stigmatism” instead of “stigma” while perched atop his high horse. It may have been an honest brain fart, but that didn’t stop plenty of fans from pouncing on the opportunity to mock him for the error.

Kayvon Thibodeaux saying “stigmatism” when he means “stigma” while saying he hates stereotypes, while stereotyping Alabama… after a whole year of Oregon fans making fun of Jimmy Lake for saying “academically prowess” makes this one of the greatest quotes in the history of sports pic.twitter.com/kgPillxgsL

They are dragging Kayvon Thibadeaux on this app and he deserves every ounce of it for jumping on TV to act fake smart. Remember, it’s always okay to just say nothing instead of speaking and revealing that you don’t know the difference between stigma and astigmatism.

Don’t worry, Kayvon. Any stigmatism is just in the eye of the beholder. https://t.co/3iO1RcpOsT

Klatt also caught some heat for not pushing back against Thibodeaux’s assertion, and issued an apology for not doing so.

No excuses…should’ve pushed back! Fact is a University of Alabama education is very good

When you consider Thibodeaux is considered one of the favorites to be selected with the top pick in this year’s NFL Draft, I’m sure he couldn’t care less about the blowback, but that doesn’t mean he doesn’t deserve it.