Potential Number 1 Pick, LA Rams Fan Kayvon Thibodeaux Passes IQ Test With His Reason For Not Wanting To Play For The Rams 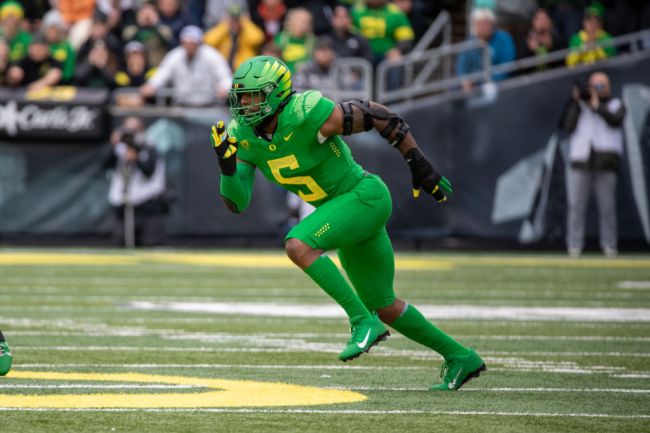 About a month ago, potential number 1 pick in the NFL draft, Kayvon Thibodeaux made headlines when he called the education at the University of Alabama into question. That led to former Bama quarterback Greg McElroy challenging Thibodeaux an IQ test. Today we learned he’d have probably done pretty well on that test.

It wasn’t any kind of intelligence testing that gave us this knowledge, but Thibodeaux’s reasoning on why he doesn’t want to play for the LA Rams. Thibodeaux is an LA native and a Rams fan, but the man’s money is more important than either of those factors.

Thibodeaux told “PFT Live” that he doesn’t want to pay California’s state taxes. Luckily for Thibodeaux, he shouldn’t have to worry about those pesky taxes. He’s going to be taken within the first few picks of this year’s draft and there are no Cali teams drafting inside the top 10.

In fact, there’s at least a decent chance that Thibodeaux could end up with the Jacksonville Jaguars or the Houston Texans. There is no state income tax in Florida or Texas.

How big is the difference between playing in Florida or playing with the Rams or another Cali team? For this year’s rookies it was pretty significant.

While #1 pick Trevor Lawrence didn’t pay any state taxes, Zach Wilson surrendered $2.52 million of his signing bonus to the state of New Jersey. Trey Lance gave up $2.71 to California after being drafted by the San Francisco 49ers.

This kind of intelligence being put on display is one good reason for the Jags to take Thibodeaux over Aidan Hutchinson at pick 1. It’s also a good reason why Thibodeaux might actually be hoping to wind up in Jacksonville unlike most of the rest of the league.

Luckily, it doesn’t seem like that state tax rate is having too much of a negative impact on the LA Rams as they’re preparing to take on the Bengals in the Super Bowl in a few days.