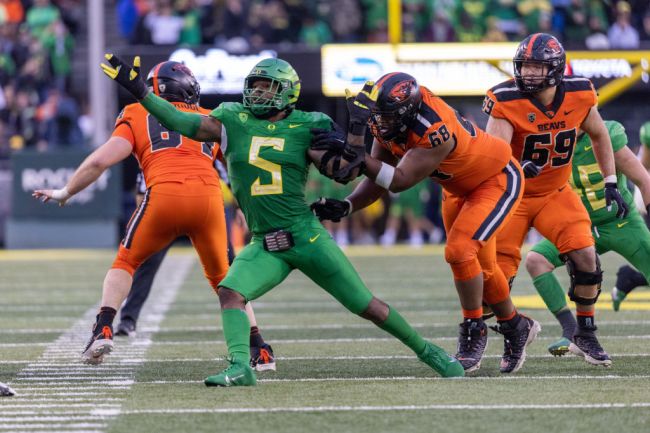 Kayvon Thibodeaux spent much of this past college football season being viewed as a strong condidate to be the top pick in this year’s NFL Draft. Over the course of the season, he amassed 49 tackles, 7 sacks, and a pair of forced fumbles, but was suddenly getting competition for that top spot.

The debate became whether the Jaguars would take Thibodeaux, Aidan Hutchinson, or one of the draft’s top offensive linemen. Recently, Thibodeaux has seemed to entirely exit the conversation and is now being projected to be the third edge rusher taken in this draft.

If you ask Thibodeaux, he doesn’t seem particularly sure why. In fact, he was asked during Oregon’s Pro Day what the most ridiculous was that he’s heard in the draft process and he said it’s that he isn’t the best player in this draft.

I asked Oregon’s Kayvon Thibodeaux what was the most ridiculous thing he’s heard during the pre-draft process and his answer was: “that I’m not the best player in this draft.”

That’s the kind of confidence you like to see from a player you’re about to spend a top 5 pick on. He also might be right. There are plenty of reasons why he was so highly regarded before this season and his athletic testing certainly didn’t hurt him.

There are likely a few teams that still view him as the top edge rusher in this class and are praying that he drops to them. The Lions, Texans, Jets, and Giants probably all wouldn’t mind if he slid past the Jaguars at the top spot.

Wherever it is that Thibodeaux winds up, it seems like he’ll be playing with a chip on his shoulder if it’s anywhere besides Jacksonville.