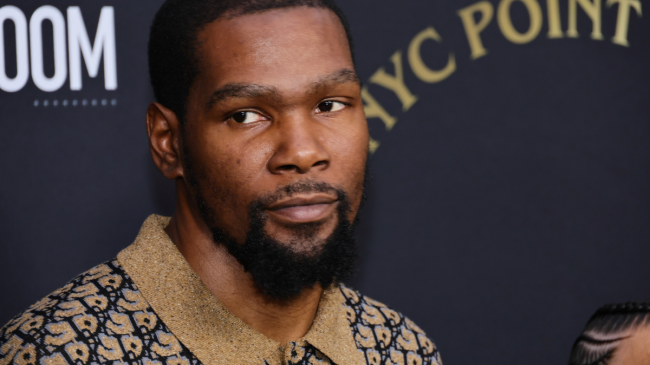 Kevin Durant was spotted playing pickleball this week, which has fans questioning his NBA future.

For those not familiar with the game, it’s a mix between tennis, ping pong, and badminton. It uses an oar-like paddle and whiffle ball and sets up like your typical tennis match with one (or two) players facing off on each side of the net.

The smaller courts, deader ball, and ability to play with partners make it a popular game amongst retirees. With less effort being needed to move sideline to sideline, it’s a game that can be played by just about anyone. While the average age of participants is dropping, USA Pickleball still notes that more than half of the core players are above 55 years old, with one-third of that crowd being 65+.

So, when KD was spotted playing a friendly pick-up game of pickleball in the park, fans hilariously joked that he was prepping for the next stage in his life.

KD getting the hang of this pickleball thing 🙌🏓

Durant has been in the midst of uncertainty all offseason. He demanded a trade after the Nets lost to the Celtics in the NBA playoffs, giving the franchise an ultimatum to either get rid of him or head coach Steve Nash. After being shopped around to a few suitors to no avail, he wound up back in Brooklyn with Nash, Kyrie Irving, and Ben Simmons.

But there’s always that sense that Durant could wind up doing the unthinkable. He’s a wildcard, and having won an NBA title, proving himself as one of the league’s top scorers, and playing alongside some of the best players in the world, there’s not much else to do on the court.

The basketball court, that is.

With that video of Durant on the pickleball court surfacing, many are joking that he’s just counting down the days until retirement.

One fan wrote, “KD looks like he’s preparing himself for retirement lol!”

If he does decide to hang it up, watch out. This fan joked, “Careful he might join last year’s pickle ball champions,” noting Durant’s tendency to jump to the perceived best team throughout his NBA career.

In reality, KD is likely far from retirement, but this pickleball commentary is A+ content.