After Everything That Went Down In Brooklyn Last Year, KD Wants To Team Back Up With James Harden In Philly 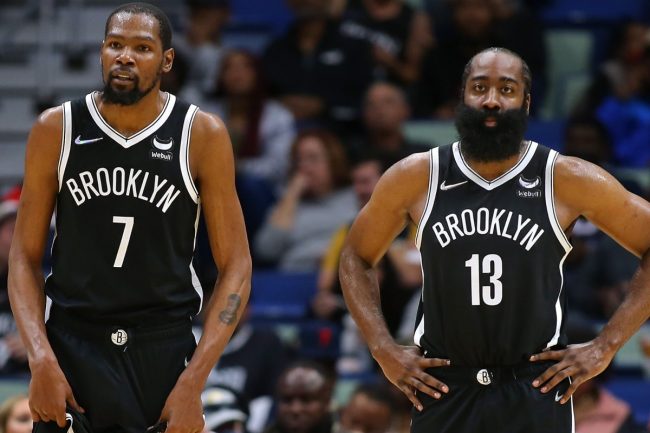 Kevin Durant’s offseason drama has developed a new twist. On Wednesday, it was reported that he has an interest in being traded to two championship contenders.

The superstar forward says his ideal landing spots would be either Boston or Philadelphia. While both spots would create incredible storylines, it’s a potential deal with the Sixers that’s most interesting.

Should KD land in Philly, it would mean a reunion with guard James Harden. That relationship seemed rocky following the way things ended with the Nets last season. Harden essentially forced himself out of Brooklyn, noting a disagreement with Durant on their ideas of ‘team culture.’

Durant questioned Harden’s commitment to the Nets, and even refused to pick him for his All-Star team in February, but those issues have apparently been cleared up.

KD wants to team back up with James Harden

SNY’s Ian Begley had the following to say about a potential trade to the Sixers.

Something worth noting: As of earlier this week, there were high-ranking members of the Sixers who’ve felt strongly about engaging with Brooklyn on a Durant trade.

It would be a bit strange on the surface for Durant to reunite with James Harden after the way things played out in Brooklyn. Is there any lingering issue between Harden and Durant? For those reading the tea leaves, it’s worth pointing out that both Durant and Harden spent time together in London recently.

Not only does it appear that KD has gotten back on good terms with Harden, but it also looks like there’s interest from the Sixers’ front office in luring Durant to Philly.

Remember, Harden renegotiated his contract to be more ‘team friendly’ over the offseason. It could allow the Sixers to go after a star player. Maybe Durant can be that guy.

ESPN’s Frank Isola backs up the reports that Durant would like to reunite with Harden in the City of Brotherly Love.

It’s hard to follow at times but yes Kevin Durant would like to play with James Harden, who was in London with Durant around the time Durant met with Nets ownership. (Maybe Harden, an expert at forcing trades, is serving as an advisor.) https://t.co/UnuXdndnSk

This deal would almost assure that Philadelphia is the favorite to represent the Eastern Conference in the NBA Finals next season. The elephant in the room, though, is figuring out who it could trade in a possible deal with the Nets.

Brooklyn won’t just give away a star for a ragtag bunch. Begley named a few possible candidates should the Sixers look to form a trade package.

The Sixers would almost certainly have to include Tyrese Maxey in a trade for Durant. Given the dynamics at play, you’d think that Tobias Harris, Matisse Thybulle and other players/draft picks would be included.

With interest from both Durant and the Philadelphia front office, this is something to keep an eye on. It would be quite comical to see the duo playing together for a third franchise after everything that’s transpired over the last year.