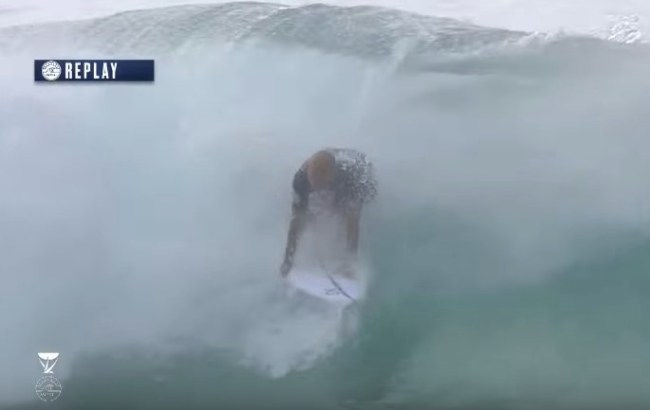 He’s been named World Surf League Champion a record 11 times but the 46-year-old from the East Coast of Florida is getting old(er) and experiencing injuries while focusing on his infamous wave pool. He injured his right foot last year and told WSL’s Jake Howard back in September “Every time I surf it’s just a little more time I need off, so I think I’m going to buckle down these next couple months.”

It looks like Kelly Slater’s back in world-class form based on this clip below. He gets barreled, then knocked off his board. At this point, Kelly later said he thought he was bodyboarding his way out of the wave but against all odds, he’d actually landed on his board and was able to pop back up and ride again after wiping out. One of the most improbable things you’ll ever see in surfing.

I’ve got the clip here from Instagram and YouTube. The YouTube clip actually shows all the waves Kelly Slater and Felipe Toledo rode in their Round Three, Heat 12 matchup of the 2018 Billabong Pipe Masters.

I set the YouTube clip to start around the 3:50 mark when Kelly rode that wave but you can watch the full supercut of the waves ridden that’s only around 6 total minutes of footage if you want.

Here’s the Twitter version for anyone out there who prefers that. You can throw in a RT or follow me at @casspa below:

He gets barreled, knocked off his board, somehow lands on the board, and gets back up?!?!? @kellyslater #PipeMasters pic.twitter.com/pIVAbs88Oh

Kelly last won the Pipe Masters in Hawaii in 2016. It’s the event that he’s won multiple times. It’s also the WSL’s premier competition. All eyes in the surfing world are on the North Shore when the Pipe Masters/Pipe Pro is running. Kelly Slater won his Round 3 Heat 15.60 to 6.77 and advanced. He’ll face Brazil’s Jesse Mendes and Joan Duru of France in the 4th Round.

The next call for the Billabong Pipe Masters is this morning (Hawaiian time) with the event expected to run as the North Shore is getting hit with favorable conditions at the moment. To stream the event live (for free) and for full results, you can check out the WSL’s website.