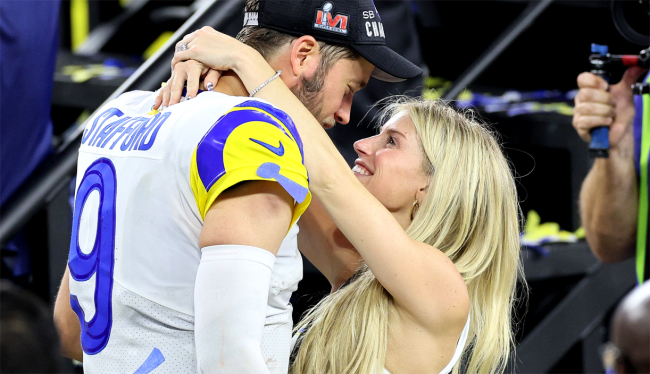 Kelly Stafford is very concerned about her husband Matthew’s concussions and also pretty angry about players getting injured on dangerous turf in NFL stadiums.

Matthew Stafford suffered a head injury during the Rams’ loss to the Buccaneers in Week 9 and was forced to miss the Rams’ Week 10 loss against the Cardinals while in the concussion protocol.

Rams head coach Sean McVay said this week that Stafford is expected to clear concussion protocol this week and play on Sunday in the game against the New Orleans Saints. The veteran quarterback was reportedly a full participant in practice on Wednesday.

On Tuesday, however, Stafford’s wife Kelly broke down, fighting back tears during her The Morning After podcast talking about her husband and his head injuries.

“I truly love watching my husband compete and do something he loves,” Kelly Stafford said. “It’s what gives him joy, therefore it gives me joy. But would I give it up in a heartbeat? 1,000 percent. I’d give up the football, the money, the fame, everything. I don’t need that. I just need the man I fell in love with to be the same man for my kids and the life that we are going to live.”

Kelly continued, “I fell in love with Matthew because he was funny, witty, cute and a little chubby and kind and patient and just f–king smart. It’s scary to think that Matthew may not be around.”

She added that she believed his concussion was caused by “a stack up of hits.”

“I think his head finally said, ‘I just need a break’ and made him aware of it,” she said.

Despite all of that, Kelly doesn’t think Matthew is quite ready to call it quits.

Kelly also took aim at the NFL, saying the league needs to “just sit down and say, ‘This is a big deal. It’s happening. We need to figure out how to keep these guys safe.'”

On Wednsday, continuing on her crusade to make the NFL safer for players like her husband, Kelly Stafford went after the league for allowing their stadiums to still have dangerous turf playing surfaces.

“@NFL, do something. Show that you wanna make it better for future generations,” she posted on Instagram. “Saying it doesn’t matter what these men play on is complete negligence on your part.”

This surely was a reaction to her husband’s teammate and number one wide receiver Cooper Kupp being forced to undergo surgery to repair an ankle injury he suffered this past Sunday on the turf field at SoFi Stadium.

Kelly Stafford is also echoing the sentiment of many NFL players including Aaron Rodgers and NFL Players Association President JC Tretter. (Despite what Jerry Jones has to say about it.)