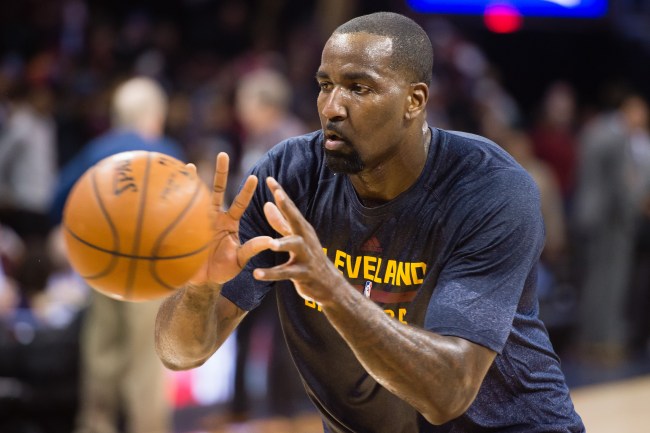 Kendrick Perkins is not happy with his former teammate Kyrie Irving right now.

Last week, Irving organized a conference call with players and advocated for them to sit out the season to not distract people from the Black Lives Matters protests taking place across the country.

Sources tell The Athletic that a group consisting of 80-plus players — including NBPA vice president Kyrie Irving, NBPA president Chris Paul, Kevin Durant, Carmelo Anthony, Dwight Howard, Donovan Mitchell and Avery Bradley — discussed finding unity and a way to attack a cause amid the nationwide unrest stemming from racial injustice, systematic racism and police brutality as well as what the world continues to face during the coronavirus pandemic.

“I don’t support going into Orlando,” Irving told the players. “I’m not with the systematic racism and the bullshit. … Something smells a little fishy. Whether we want to admit it or not, we are targeted as black men every day we wake up.”

Perkins doesn’t agree with Kyrie’s stance and blasted him for causing “unnecessary drama between the NBA brothers” during a time of crisis.

I’m sooo damn confused when it comes down to Kyrie Irving….just 9 days ago he was saying this now all of sudden it’s something different?! Now he’s started unnecessary drama between the NBA brothers which is something we don’t need right now. https://t.co/Je1374Bh9a

Kyrie talking about he’s “Willing” to give it all up….don’t be Willing, Do It!!! Retire today and take this on full time then Kyrie. Maya Moore walked away from the Game of basketball and took action in something that she believed in. pic.twitter.com/nkjBy8Z5MR

On Wednesday morning, Perkins went on ESPN’s “Get Up” and once again ripped into Irving for becoming a “distraction.”

“If you take Kyrie Irving’s brain and put it in a bird right now, guess what that bird is going to do? It’s going to fly backwards because Kyrie Irving right is confused, he’s showing his lack of leadership.

When you look at Kyrie I’m ok with you changing your mind and having a different way of thinking and you know what, we need to make a stand, but what is the plan after that, he didn’t have one, so once again that showed his lack of leadership and guess what’s been going on the last two days in our world two people have been lynched in the state of Texas, an African-American lady was killed in Akron,Ohio and they have been highlighted as they should have been? No, because the last two days we’ve been talking about Kyrie Irving, so Kyrie Irving you are the distraction.