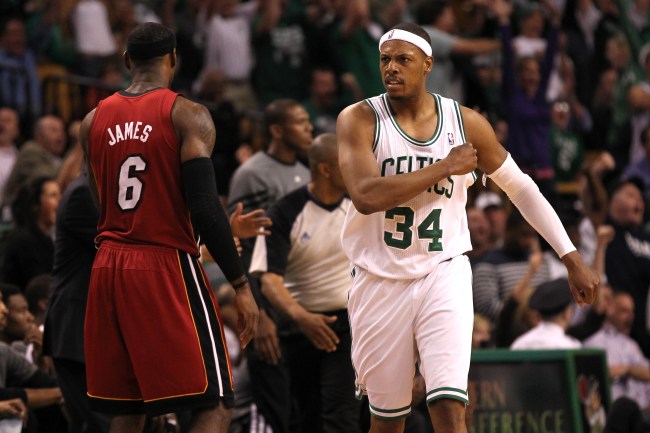 Paul Pierce doesn’t seem to be a fan of LeBron James and there could be a personal reason as to why that is.

On Wednesday, Pierce was blasted when he left LeBron out of his top 5 players of all-time.

Thoughts on @paulpierce34's Top 5 NBA players of all time? pic.twitter.com/KwsxczOCrK

Someone needs to give Paul Pierce a drug test. They hate on lebron and that’s he’s not top 5 is ridiculous. You can tell he still spiteful

Kendrick Perkins, who played with both LeBron and Pierce, says he knows why the two dislike each other so much and explained the reasoning during ESPN’s Quarantimes podcast.

According to Perkins, Pierce went at LeBron during his rookie season and “spit at the bench” towards Bron during a preseason game which led to a career-long rivalry between the two.

Paul Pierce’s list is personal…Paul and Bron have not liked each other since Bron’s rookie year. Here’s some backstory to this, we’re playing in Columbus, Ohio my rookie season against the Cleveland Cavaliers. When LeBron was coming into the league he was getting a lot of heat from players…his first preseason game is against Paul Pierce, so Paul is talking big noise to the Cavs bench and they’re all sitting over them, Bron, Drew Gooden and everybody. so Paul actually spits over there at the bench, the ultimate disrespect. After the game both teams were meeting the back and guys were ready to fight.

And ever since that moment LeBron James and Paul Pierce hate each other, they don’t speak to each other.

Pierce is a great player but it seems like he was never happy with LeBron overshadowing him through the years.