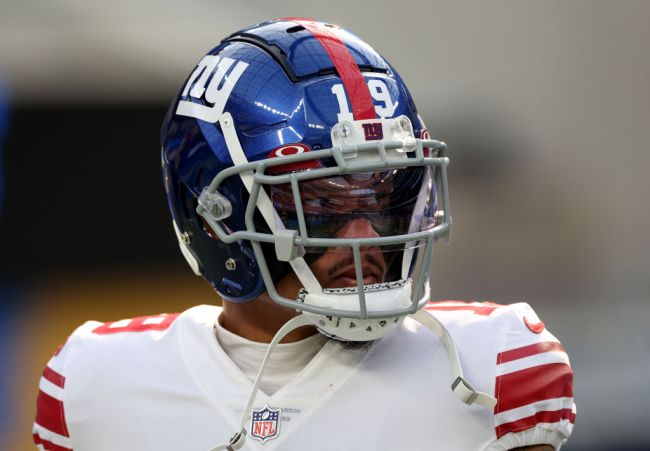 The New York Giants started their voluntary workouts this week and there was one particularly notable absence. 2nd year wide receiver Kadarius Toney was missing from the workouts after the Giants spent a first round pick on him a year ago.

Meanwhile, nearly all of the Giants’ veteran players were in attendance in an effort to try and improve after a disastrous 4-13 season. It seems some of those veterans were not thrilled to see the 2nd year player skipping these workouts.

Kenny Golladay spoke to reporters about why he chose to participate in the workouts.

Kenny Golladay on attending voluntary mini-camp: "That's how much it means to me, especially coming off of last season. Everyone should definitely be here."

He and Sterling Shepard plan on reaching out to Kadarius Toney: pic.twitter.com/UQjohM7aXs

“I guess you could just say that’s how much it means to me. Especially coming off last season, I feel like the whole team is just trying to start off on a good note.”

Then he took his shot at Kadarius Toney.

While Toney isn’t the only player missing from the Giants’ voluntary workouts, he is the only one missing who really should be there. Of the rest of the guys missing, one’s wife just had a baby, one might not be a Giant anymore in a week, and the other is a kicker who has been in the league for over a decade.

On the other hand, Toney missed parts of last year’s preseason and a chunk of the regular season and is going into his second year in the league with a brand new coaching staff in New York. I think it’s safe to say that it would have been beneficial for him to be at these workouts to build chemistry with his quarterback after all of the time he missed for the Giants last year.

Hopefully getting called out by one of the team’s veteran receivers will convince Toney to change his approach and make Giants fans feel a little better about that first round pick the team spent on him last season.