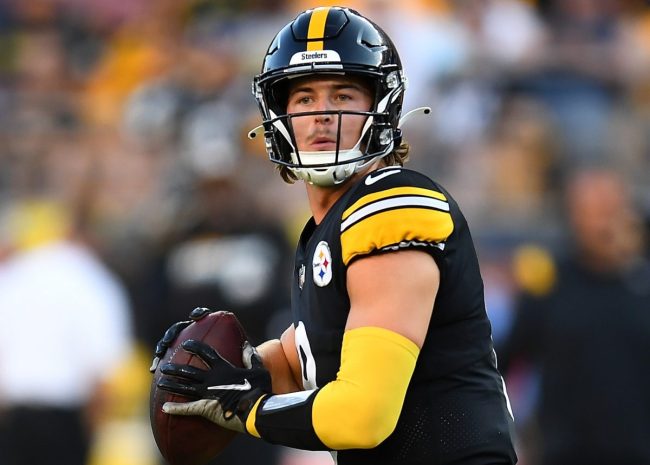 The Pittsburgh Steelers have had one of the better quarterback battles this preseason as they gear up for the 2022 campaign. In the QB room are Kenny Pickett, Mitchell Trubisky, and Mason Rudolph.

Trubisky was picked up by the Steelers this offseason, with many pinpointing the passer as the immediate replacement for Ben Roethlisberger. They also believe that he’ll form the bridge between Big Ben and eventual face of the franchise Kenny Pickett, who Pittsburgh picked in the first round of the latest NFL Draft.

Rudolph’s future in the Steel City is uncertain as he was the center of trade talks this preseason. It appears that he’ll stick around in Pittsburgh this season, and with the release of the initial depth chart, he could play a larger role than originally anticipated.

While Trubisky was pegged as this year’s starter, many thought that Pickett would rise to No. 2 on the depth chart following a spectacular preseason.

But that wasn’t the case. Rudolph, despite struggling for much of his time with the Steelers, is ranked ahead of Pickett. It caught the attention of a lot of folks on social media.

Fans and media were quick to respond after seeing Kenny Pickett land at 3rd string on the depth chart. Take a look at the immediate social media reaction.

Of course, many took a chance to jab at the quarterback’s small hand measurements from the NFL Combine.

Kenny Pickett when he sees Mitch Trubisky at the top of the depth chart pic.twitter.com/H4dB3ErHBy

Kenny Pickett seeing that Mason Rudolph is ahead of him on the Steelers’ official depth chart pic.twitter.com/pX7vhbcHNc

Others just appear stunned at seeing Pickett behind Mason Rudolph on the roster considering Pickett’s lofty draft ranking and Rudolph’s subpar play in the past.

NFL expert Trey Wingo said, “The fact that Kenny Pickett is 3rd on the Steelers depth chart behind Mason Rudolph is far more interesting than Trubisky looking likely to start week one.”

I think most everyone was shocked with the initial depth chart standings. We’ll see how it all plays out over the course of the season.