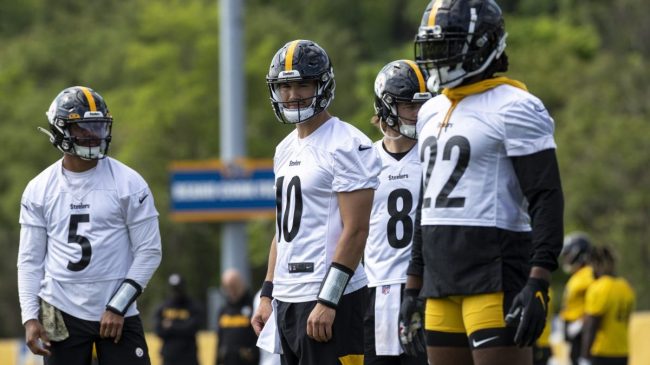 Mike Tomlin and the Pittsburgh Steelers have yet to name a starting quarterback just six days out from their season-opening game with the Cincinnati Bengals.

The Steelers have been the center of attention all offseason due to their three-way quarterback competition. The team brought in veteran Mitchell Trubisky in a trade with the Buffalo Bills after the retirement of future Hall of Fame QB Ben Roethlisberger. They then drafted Pitt’s Kenny Pickett in the first round of the 2022 NFL Draft. While long-time Roethlisberger backup Mason Rudolph also vied for the spot.

Rudolph now appears to be out of that competition and is the subject of trade talks.

That left Tomlin with a difficult decision. But it appears his team may have already helped him make it.

Trubisky has long been considered the leader in the clubhouse to claim the starting job. Recent reports suggested he would have to lose it rather than Pickett being able to win it. Now it appears the Steelers are making that official.

Probably a strong indication of the direction the Steelers are going at quarterback on opening day vs. the Bengals.

Trubisky’s teammates voted him one of five team captains for the upcoming 2022 season. While that doesn’t guarantee he’s won the starting job, it’s a pretty good inclination.

The North Carolina product made 50 starts over four seasons for the Chicago Bears. He compiled a 29-21 record in that span, throwing for10,609 yards, 64 touchdowns and 37 interceptions. That includes a 2018 season where he went 11-3 as a starter and was named to his only Pro Bowl.