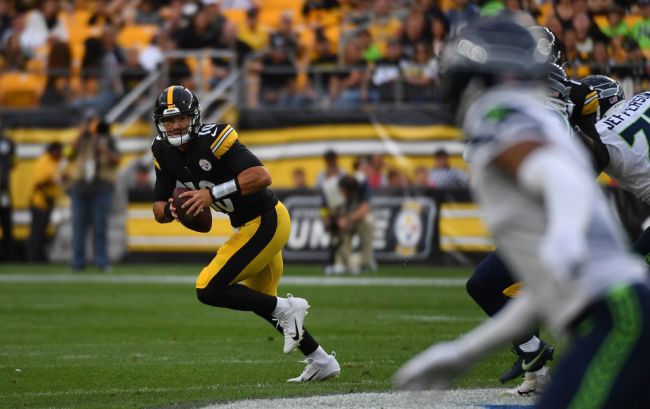 The Pittsburgh Steelers set themselves up to have one of the NFL’s most interesting quarterback competitions this offseason.

Following Ben Roethlisberger’s retirement, the Steelers entered the offseason with Mason Rudolph atop their quarterback depth chart, but they didn’t allow that to remain true for long. They acquired Mitch Trubisky through free agency and then spent a 1st round pick on Kenny Pickett.

It set up an interesting QB competition where the Steelers claimed all 3 quarterbacks had a shot at the starting job even as recently as a few weeks ago.

It seems that may not be the case anymore. Today, ESPN’s Dianna Russini revealed that she’s been hearing that the Steelers starting job is Mitch Trubisky’s to lose.

.@diannaESPN was told by a Steelers source that the Steelers' starting QB job is "Mitchell Trubisky's job to lose" 👀

Who do YOU think should start in Pittsburgh? 🤔 pic.twitter.com/zXWYyOtQyd

Trubisky having the job locked up comes as a bit of a surprise after the first 2 weeks of the preseason. While Trubisky has been fine as the team’s starter in their first 2 preseason games, it had seemed that Pickett had impressed enough over those 2 games to at least remain in the competition to start for the Steelers.

Over those 2 games, Kenny Pickett has completed 19 of 22 pass attempts for 171 yards and 3 touchdowns. Those numbers include the game-winning drive that Pickett led against the Seahawks in the Steelers’ preseason opener.

Despite those performances, it seems the Steelers are set on the idea that Pickett will spend the early part of his career backing up Trubisky.

Despite the current hierarchy, their quarterback position will be one to watch. This may be Trubisky’s job to lose, but if he struggles early in the season, there will likely be plenty of people wanting Pickett to get his shot.