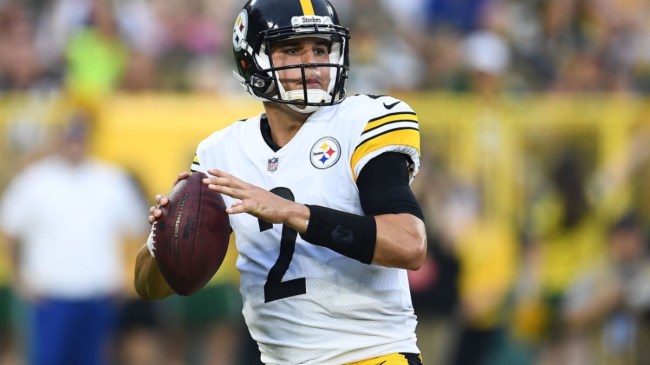 The Pittsburgh Steelers’ quarterback competition appears to have been decided ahead of their final preseason game.

According to a recent report, the starting job is Mitch Trubsiky’s to lose. With Kenny Pickett likely to serve as his backup at the start of the 2022 season, Mason Rudolph appears to be the odd man out in Pittsburgh.

While the Steelers could certainly hold on to Rudolph as an insurance policy if either of the other two get injured, it appears there is at least a chance that Rudolph could be headed elsewhere this season.

According to a report from Ian Rapoport, Rudolph has been drawing trade interest from teams around the league.

From @NFLNetwork: Players to watch as we get closer to Tuesday, taking a look at #49ers QB Jimmy Garoppolo, #Chiefs RB Ronald Jones, and #Steelers QB Mason Rudolph (who has drawn trade interest). pic.twitter.com/hsyKqC8LRt

It would be interesting to find out who the teams are that have expressed interest. The Seahawks could be in that mix with a couple of questionable starting options, but Rudolph is probably more of a lateral move for them.

the Cowboys, Bears, and Raiders all stand out as teams who could be interested in upgrading their backup quarterback in case of an injury to their starter.

Rudolph has a bit of a spotty history as a starter in the league. He did manage to lead the Steelers to a 5-3 record in his 8 starts in 2019, but he did it while throwing 9 interceptions with only 13 touchdowns over the course of that season and averaged under 200 yards per game.

There were times he struggled to separated himself from Devlin Hodges on the Steelers’ depth chart and he failed to lead the Pittsburgh Steelers to a win against the Lions in his only start last season.

Still, it looks like Rudolph could get a shot somewhere other than Pittsburgh this season.