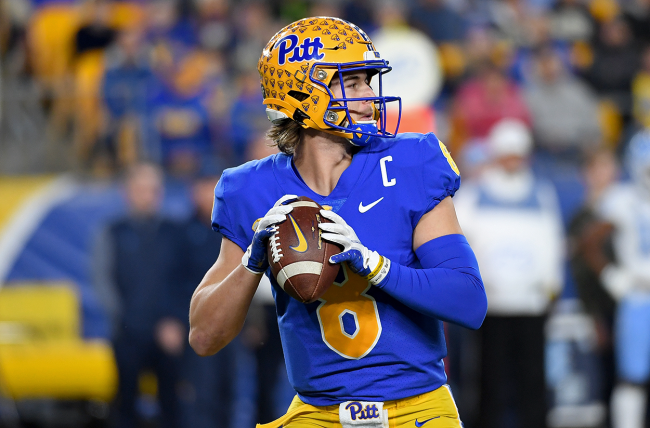 After hearing his name called with the No. 20 overall pick in the 2022 NFL Draft, Kenny Pickett will be playing his professional football in the same home stadium in which he played his college ball. The Pittsburgh Steelers play at Heinz Field, where he played the last four years with the Pittsburgh Panthers.

To get to this point, Pickett skyrocketed up draft boards with a strong 2021 campaign. Choosing to use his fifth year of eligibility, the New Jersey-native threw for 4,319 yards and 42 touchdowns with only seven interceptions en route to an 11-2 season, an ACC Championship, an Orange Bowl birth and a Heisman Trophy ceremony invite.

But it almost didn’t happen that way. Pickett didn’t have to finish out his career with the Panthers. He had at least one other offer for his final year.

According to Pittsburgh head coach Pat Narduzzi, people either directly or loosely associated with Notre Dame spoke with Pickett about the idea of playing for the Fighting Irish as a grad transfer last season.

“I just found this out, you know, I’ll throw it out there,” he said, speaking with Roddy Jones of SiriusXM. “I guess people reached out to Kenny Pickett to go to Notre Dame a year ago and I had no idea. He didn’t say anything to me, which obviously it didn’t get that serious, but Notre Dame recruited him through the back channels.

“It’s not (former Notre Dame coach) Brian Kelly but someone’s telling these guys, whoever they are, to come to Notre Dame, right?”

Ultimately, Kenny Pickett chose to play his final season at Pittsburgh instead of leaving for Notre Dame and it worked out well for him in the end.

Had Pickett gone to Notre Dame, it would have sent shockwaves across college football. And although Narduzzi did not say so directly, it would be curious to know if there was some sort of financial incentive involved. He said that NIL and the transfer portal go hand-in-hand.

Why would the three-year starting quarterback at an ACC program transfer to play for a team that was more or less equivalent? If it was mostly a lateral move, what would bring him to transfer to Notre Dame?

Perhaps, if he had decided to transfer, Pickett would have eyed the weekly television exposure at Notre Dame, seeing as their games are broadcast on NBC. But that doesn’t make all that much sense because Pittsburgh was/is on TV as well, and it’s not like getting tape is a difficult thing in the modern era.

Maybe Pickett would have liked the idea of playing for a more talented program at Notre Dame. But that doesn’t make sense because Pittsburgh had Jordan Addison, who ended up winning the Biletnikoff.

Maybe if Pickett had transferred to Notre Dame, it would have been for the coaching staff. But that doesn’t make sense either, because he had been in the Panthers’ program for four years and was comfortable in offensive coordinator Mark Whipple’s offense.

So then, what was it that Notre Dame thought it could sell to Pickett to get him to transfer? Maybe, just maybe, it was NIL opportunities?

We’ll likely never know the answer any of those questions, but there is an alternate universe that exists where Kenny Pickett played his super senior year of college football at Notre Dame. Wild.