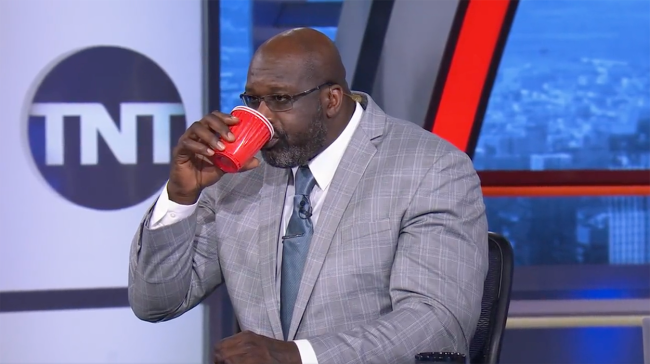 Inside The NBA on TNT

Inside the NBA consistently cleans up at the Sports Emmy Awards and for good reason. There are very few, if any, sports studio shows that can compete with the hilarious hi-jinx that goes on between Kenny The Jet, Ernie, Shaq and Chuck.

Whether it be before, during or after a game, the TNT crew is always on. They never miss and that was certainly the case on Thursday night.

As the first round of the NBA playoffs continued, the desk was at its best. They’re always funny, but they take it up a notch for the playoffs.

Especially in regard to the prank war that is surely set to unfold.

Kenny Smith kicked things off by serving Shaquille O’Neal a “protein shake” that was not actually a protein shake. It was disgusting.

Before serving the drink to Shaq, The Jet mixed up the following concoction:

When Shaq first took a sip, he didn’t seem to mind the horrible mix of flavors. And then he found out what was in it and gave Smith a death stare as Smith explained that he wasn’t actually supposed to like it, he was supposed to sniff it and not want to drink it.

Eventually, Shaq gave credit to Smith, saying that he got him, but that it means war. Here’s how the whole thing went down:

Shaq is going to get his revenge. Stay tuned to TNT.