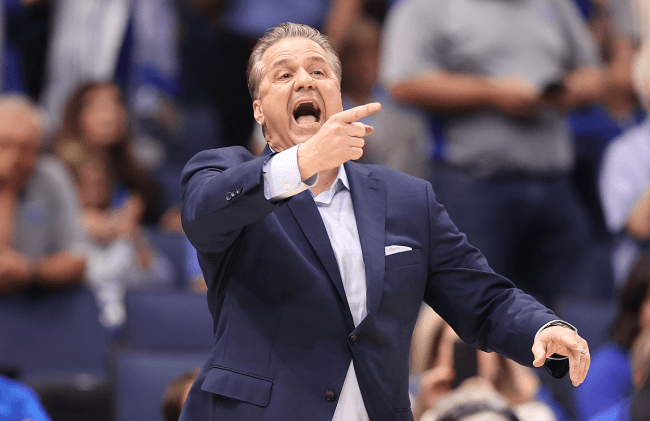 John Calipari and No. 2-seed Kentucky lost to No. 15-seed Saint Peter’s in the first round of March Madness. It was a monumental upset and the insane salary gap between the two programs really puts the gravity of the outcome in perspective.

But that doesn’t mean that Coach Cal is getting fired— despite what some dim-witted Wildcat fans might have hoped.

On Monday morning, a report began to circle on Twitter. It said that Calipari was meeting with Kentucky’s athletic director about his future with the program.

The report came from a man named Marc Fiscarelli, who claims to be an NCAA basketball writer covering Northwestern Hoops and UIC Athletics since 2011, as well as a U.S. Basketball Writer’s Association member. He says that he is based out of Evanston, Illinois and has 355 followers.

Per an SEC source, I’m told there’s a meeting scheduled later today between John Calipari and Kentucky Athletic Director Mitch Barnhart regarding the head coach’s future and expectations moving forward for the program.

Fiscarelli is either not a real person all together, or a real person with fake scoops. Either way, he and his report about coach Cal was incorrect.

It was easy to figure out, considering that Calipari was in Saint Louis, but people on the internet ran with it anyway. Kentucky did lose to Saint Peter’s after all.

Despite the fact that it was pretty obviously not true, a Saint Louis reporter was kind enough to have the rumor put to bed by the man himself. Calipari looked very confused when he was asked about his meeting with Kentucky’s AD.

Asking Cal about rumors? Feels like I'm back in Lex. Saw the rumors, I live/work in St. Louis, and I was covering the USBWA event. Here's what Cal had to say about the meeting with Mitch rumors. Do with it what you will #BBN…@HowardWKYT @DrewFranklinKSR @RowlandRIVALS pic.twitter.com/2KsLwaUgS7

Not long thereafter, even Mrs. Calipari got in on the fake news with a joke of her own on Instagram.

Will Calipari have a meeting with Kentucky’s AD sometime during the offseason? Yeah, probably. But he is not getting fired. Everyone relax.