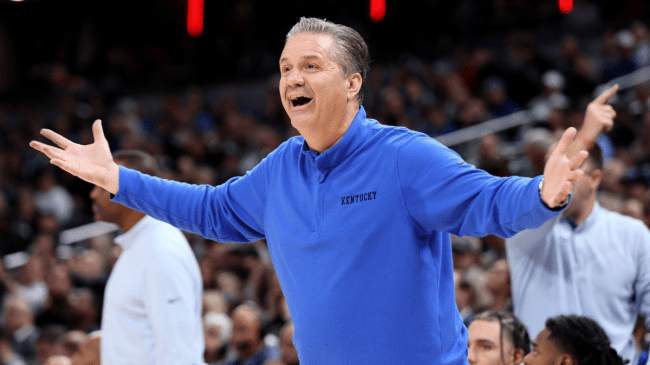 Another season, another chance for Kentucky fans to spew their hate towards head coach John Calipari.

Last year, we heard the complaints throughout the season as Coach Cal dealt with a variety of different issues. Star player Shaedon Sharpe was held out of action before declaring for the NBA Draft without ever stepping foot on the floor for the Wildcats. Kentucky then lost the SEC race to Auburn, which landed them a No. 2 seed in the NCAA Tournament.

The frustrations culminated with a first-round exit and loss to No. 15 seed Saint Peter’s. Message board warriors called for Cal’s job following that shocking defeat, as he’s been unable to bring home a national championship over the last decade.

Some of the criticism of Calipari is warranted. Despite landing top ranked recruiting classes year after year, he’s been largely underwhelming in the postseason. His teams haven’t reached a Final Four since 2015, twice being bounced before the close of the first weekend.

Still, he consistently has Kentucky atop the SEC standings and continues to keep the program top of mind in the college basketball world.

Calipari is back for 2022, and with a very capable team. He’ll have an opportunity to put last season’s loss to Saint Peter’s in the past and move deep into NCAA Tournament play. Most notably, Player of the Year recipient Oscar Tshiebwe returns to lead the Wildcats, and he absolutely showed out in his debut against Michigan State on Tuesday with 22 points and 18 rebounds.

It was a game that many think Kentucky could’ve and should’ve won. They led in the final seconds of both regulation and the first overtime period but missed free throws and defensive breakdowns on inbound passes allowed the Spartans to stick around.

Despite the fact that Michigan State is led by one of college basketball’s best coaches, and it recently took Gonzaga to the wire, too, Wildcat fans have gone ballistic online. The loss has given Big Blue Nation yet another opportunity to bash John Calipari.

Many blame Coach Cal for a lack of creativity on offense, mindboggling substitutions, and poor defensive execution in the clutch.

Believe it or not, apathy is setting in for some fans. One person wrote, “We’re not elite anymore. I’ll root for UK, I have all my life, but John Calipari’s time is over. Just not interested any longer. It’s a terrible feeling.”

That seems like a bit of an overreaction just three games into the season.

Others are taking it a step further, suggesting that he be fired ASAP. One fan commented, “Literally exactly what happened in the tournament last year, university needs to fire John Calipari or nothing will change.”

Those fans might want to be careful what they wish for. Firing their head coach would all but break up their No. 1 recruiting class for the 2023 cycle. That cycle boasts four of the nation’s top 10 prospects, including No. 1 overall player DJ Wagner.

I get the frustrations after a close loss, but there’s a long season to go.