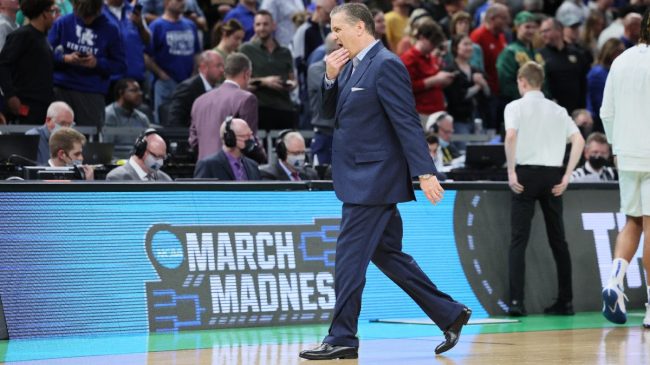 Former top recruit Shaedon Sharpe has declared for the NBA Draft. According to those close to the situation, he has no intention of returning for his sophomore season at Kentucky.

The forward never stepped foot on the court during his freshman year with the Wildcats.

Kentucky freshman forward Shaedon Sharpe will reportedly declare for the 2022 NBA Draft and turn pro, according to @ShamsCharania & @KyleTucker_ATH.

Sharpe never played a minute for the Wildcats after behing held out the 2021-22 season.

According to coach John Calipari, that was the plan all along.

Sharpe, who was a mid-year enrollee, didn’t join the roster until January. Rather than being thrown into the fire, Coach Cal said that he’d spoken with Sharpe’s family about a plan moving forward.

That plan was to have his star forward sit out the remainder of the season, return to Kentucky in 2022-23, then head off to the NBA as the top draft pick.

After talking with Shaedon and his parents, we want to end all of the speculation by again saying that he will not play for us this season.

He is committed to bettering himself and our team in practice this year and being better prepared to lead us next season.

Calipari tweeted back in February that Sharpe would not see the floor, but that he was “committed to bettering himself and our team in practice this year and being better prepared to lead us next season.”

In a post-conference following a win over South Carolina, Cal expanded on those thoughts, saying that the decision to return would help solidify Sharpe’s standing as the NBA’s No. 1 overall pick in 2023.

Those words are now coming back to bite Calipari, as it looks like he’s been played by Sharpe and his family.

With news breaking of the forward’s departure, fans in Lexington are losing it.

Kentucky basketball fans aren’t known as being the most logical. Hell, they wanted Calipari fired after his opening round loss to Saint Peter’s in the NCAA Tournament.

Now, they’ve pulled the pitchforks back out with Shaedon Sharpe leaving the program.

Talked about it weeks ago. I dont believe Calipari had any say on if Sharpe played.

But, the Kentucky fan-base is, rightly, tired of the mixed messaging from Cal on pretty much everything.

Should've just been honest about Sharpe status from the beginning https://t.co/ySwIZJHs3K

Cal will not be a popular guy for allowing this to happen.
It’s his job to handle the team the right way. He had to know Sharpe likely wouldn’t return, yet misled fans all season long. That’s just wrong.

The Sharpe family to Cal! pic.twitter.com/KKuixWLsvt

What I don’t understand is why Shaedon Sharpe carried this attention out so long when we he already knew he was leaving. Many people was predicting for a return…

I don’t blame the kid for leaving for a top-10 pick in the draft… I do blame Cal for not playing him. #BBN

Sharpe was always leaving it’s the only reason he came to UK early. Cal is a fool for not seeing that and then refusing to play a top 10 talent when we actually needed him

Quite the reaction from Big Blue Nation. Calipari is likely to make a statement on the situation. He’d better word his response carefully because he’s digging a deep hole with the fanbase.