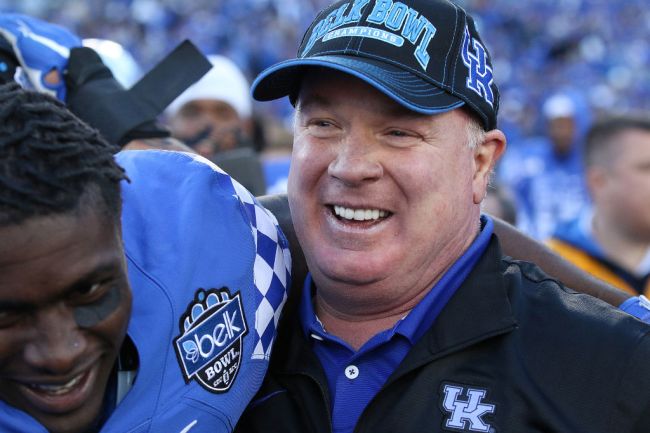 Tennessee fired head football coach Jeremy Pruitt on Monday after the Volunteers went 3-7 in 2020. Tennessee’s incredibly disappointing season wasn’t the only reason the Vols parted ways with Pruitt, however, as it has been revealed that the program has been under investigation for recruiting violations.

While the saying ‘if you ain’t cheating, you ain’t trying’ rings true for every somewhat successful Power Five program, Kentucky head coach Mark Stoops still made it a point to take a shot at Tennessee and the difficult situations the Vols find themselves in.

“I’ve gotta be careful in my response here,” Stoops said on Tuesday’s edition of Kentucky Sports Radio. “Did I see it coming? Yes, I’m grateful it came. Does it surprise me? Not one bit.”

Stoops going as far as to say he’s “grateful” that the scandal about recruiting has come out is a pretty stiff shot to the Rocky Top faithful. It’s a bold statement from the man in charge of Kentucky, which has beaten Tennessee exactly three times in their last 35 meetings, but when big brother is down, you have to get your shots in when you can.

On Tuesday, Dan Patrick reported that his sources have told him that Tennessee handed McDonald’s bags filled with cash to recruits during visits. You’ve got to imagine Stoops and other SEC coaches are loving that story as well.

This time one year ago the Vols were fresh off of a Gator Bowl win and had their sights set on a successful 2020 campaign. Now, they’re without a head football coach, an athletic director, has the NCAA breaking down their necks, and Mark Stoops talking trash.