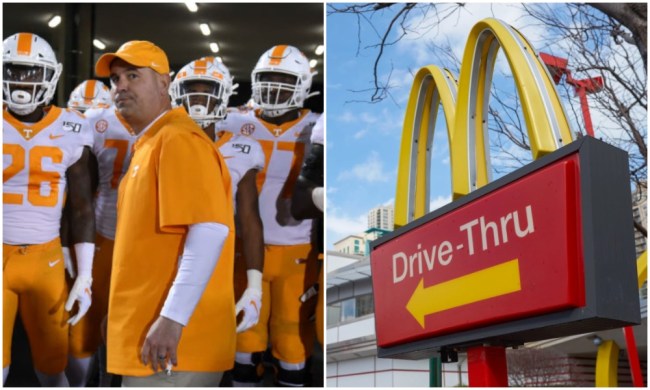 The majority of Tennessee football fans are happy to see Jeremy Pruitt out of Knoxville. Not only did he lead the Vols to a 3-7 season in 2020, but he and his staff have led the NCAA into starting an investigation into the program centered around recruiting.

We all know that college football recruiting is a complete mess. It’s a joke, really. Every Power Five school in the country cheats in one form or another. Whether it be an extremely minor violation like buying a recruit dinner or a more serious violation like handing out wads of cash, everyone cheats, it’s just some programs do it a lot better than others.

According to Dan Patrick’s sources, Tennessee hid some of their handouts inside McDonald’s bags turning the term ‘bagman’ into something a little too literal.

“I asked my source how did they get these assistant coaches on recruiting violations,” Patrick said during a segment of his show on Tuesday. “He said, well, they put money into McDonald’s bags and gave them to the recruits when they came on campus. Some of the campus visits were not organized, were not above board, but they were handing out cash. You literally had bagmen. They put the cash in McDonald’s bags.”

Source: Tennessee #Vols got sloppy with recruiting. They were handing recruits cash in McDonald's bags when they visited campus.

Also a name to look out for to fill the Head Coaching vacancy: Jason Witten pic.twitter.com/HKDd02rldz

While Volunteer fans got their wish and are now looking ahead at names like Hugh Freeze, Tom Herman, and Gus Malzahn to possibly come in and turn the program around, we can’t gloss over the fact that the Vols could be in a bad spot if the NCAA decides to drop the hammer on them.

Tennessee is already in a bad spot with the NCAA cloud hanging over them when it comes to actually luring one of the big-name coaches to Rocky Top and if more details, rumors, and reports like this start to come out it could be quite a while before we hear about Tennessee hiring yet another new head coach.