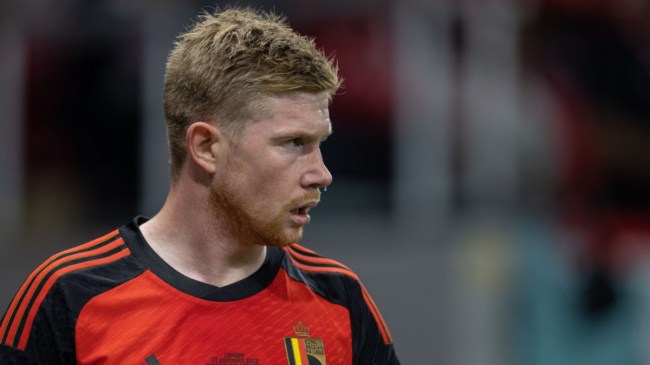 Football fans around the world have been waiting years to finally see Belgium turn the corner in a major tournament. They’ve had the talent for a while now with Romelu Lukaku, Dries Mertens, Eden Hazard, and Kevin De Bruyne leading the charge.

Unfortunately, they’ve repeatedly managed to come up short since their return to relevance on the international stage at the 2014 World Cup.

in 2016 it was a shocking loss to Wales that sent them out of a Euro that they entered as one of the favorites to win. In 2018 they couldn’t get by France, who went on to win the World Cup. In 2021 they once again ran into the eventual champs when Italy took them down in the quarterfinals of the Euro.

In a recent interview, the Guardian’s Simon Hattenstone asked Belgium star Kevin De Bruyne about the team’s chances to finally claim that elusive trophy and he had a hilarious answer. He told Hattenstone, “No chance, we’re too old.”

‘If you talk to me, Kevin De Bruyne says, you also talk to my wife, my kids, you do it at our home and you get to know us all.’ So @shattenstone did https://t.co/Lq47eiI0Iw

There are some in the football world that believe Belgium has missed their window with their current group. Their number 2 world ranking tells a bit of a different story. They also managed to take home a win against Canada in their opening match of the World Cup.

Belgium has been favored to win their group and should be able to with their toughest competition coming from a Croatia team that just might have actually missed their window.

Despite the concerns about their age, Belgium should still be able to make a run in this tournament and maybe it will be the year they can finally get over the hump.