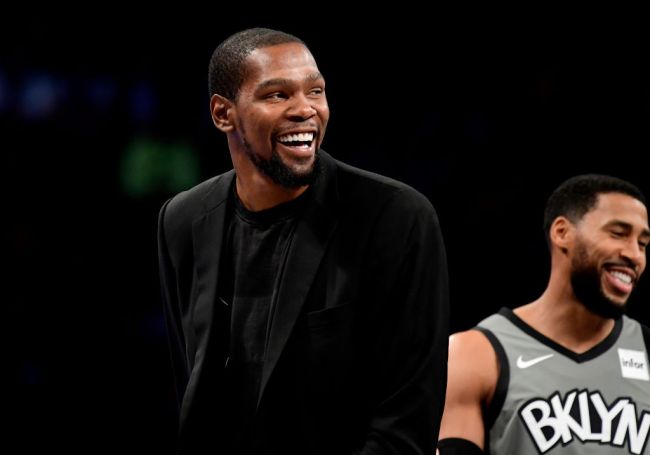 The 76ers took down the Nets 123-117 on Wednesday night in what is likely a preview of this year’s Eastern Conference Finals matchup. It was an important game for the regular season standings, but it didn’t mean all that much given the fact that Kevin Durant, James Harden, Blake Griffin, and LaMarcus Aldridge didn’t suit up for Brooklyn. It was very much just the Kyrie Irving show as he dropped 37 points in his first game back after taking time off for personal reasons, again.

With Joel Embiid at the line icing the game with just over a minute left, Philadelphia fans took it upon themselves to stay very much on brand. With KD sitting on the bench in street clothes, ‘KD sucks’ chants rang through Wells Fargo Center. Leave it to Philly scumbags to be Philly scumbags whenever the opportunity presents itself, even when it makes zero sense to do so. I live in Philly, I can say these things, plus, no real Philadelphia sports fans would argue the fact that they are, for the most part, complete scumbags.

You can literally see Durant raise his hands in confusion when the chants start. The man is just standing there asking ‘what did I do to deserve this?’

So, what did KD do to deserve these chants? It’s pretty simple, he’s one of the best players in the league and he doesn’t play for the 76ers. That’s it, that’s the story. KD, just like every other superstar that 76ers fans wish played for their squad, occupies real estate in their brains. Durant is a living, breathing human that does not suck at basketball and he plays for another team, therefore Philly fans take it upon themselves to let him know how they feel whenever he’s around.

It’ll be interesting to see if these same fans chant ‘KD sucks’ when Durant and the Nets inevitably knock the 76ers out of the playoffs on that exact floor later down the line. It’s a guarantee this happens now; Durant and karma don’t forget.