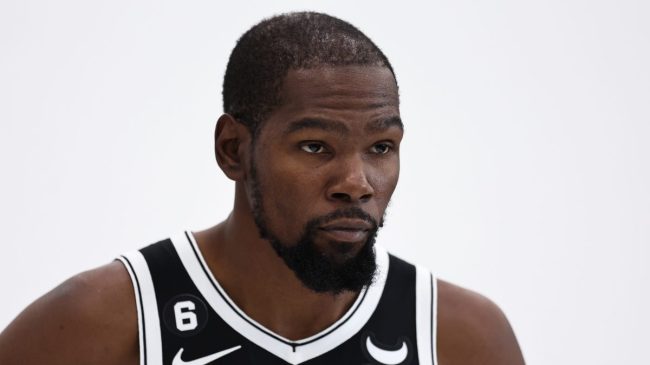 The New York Yankees re-signed Aaron Judge and the fanbase is thrilled (for the most part). However, Brooklyn Nets star Kevin Durant kind of slammed the situation when he was asked about it.

Turns out Durant is a Washington Nationals fan and didn’t like seeing Judge back with the Yankees. Jomboy Media shares his first reaction to Aaron Judge’s new deal.

“I’m a Nationals fan. I really don’t care about Aaron Judge at all.” -Kevin Durant pic.twitter.com/EFtOn1mFzW

As you’d expect, Yankees fans weren’t too happy with Kevin Durant’s statement. To be fair, it did kind of come off like he holds a grudge or something against Aaron Judge. However, the Nets’ star cleared the air early Thursday morning.

Damn this came out colder than I intended..it’s all jokes..welcome back to the city 99.. https://t.co/4ID6TrkVZ9

And there you have it. Maybe if Kevin Durant wasn’t playing in Brooklyn it wouldn’t have been such an issue with the fanbase. New York fans love New York teams. So we get it. Either way, the Yankees bring back Aaron Judge even though the situation looked rocky at times.

Although Kevin Durant cleared the air, it seems some sports fans still don’t believe him.

No. That’s what he said at first. U til he backtracked. As he always does. This is why nobody respects KD.

Everyone is a New York Knicks fan, I guess.

Yeah, New York doesn’t really care about the Nets— at all.

We’re not sure what more people want from Kevin Durant. Either way, he’s cleared the air, and Aaron Judge is with the Yankees for life.