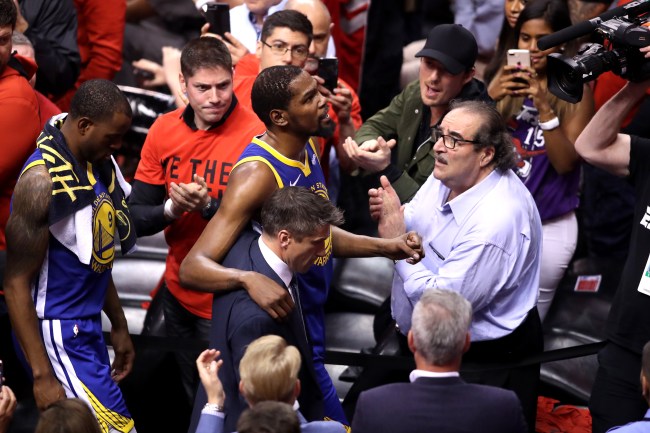 After being out for nearly a month, Kevin Durant came back for game 5 and while he looked good early on he went down with a serious looking injury in the second quarter of the game.

I ain't no doctor be Kevin Durant injury in slow motion look like you can see his Achilles roll up his leg 🤷🏾‍♂️it's hard to look at pic.twitter.com/ns3CeCMrx0

Pay attention to how #KevinDurant right calf contracts violently. Beleive it or not, the strength of the gasteocnemius muscle contracting so quickly/forcefully is what tears the Achilles tendon. pic.twitter.com/odCSgdNiGF

When you see this, it typically means a complete Achilles tendon rupture. Kudos to KD for trying to help the team. Hope the video lies. https://t.co/wnZ82wtCgs

After the game. Warriors GM Bob Myers got emotional when he confirmed that KD had a ruptured achilles during the game.

"It's an Achilles injury. … He'll have an MRI tomorrow."

Bob Myers holds back tears as he explains the magnitude of Kevin Durant's injury. pic.twitter.com/glQ6j5hATe

According to Chao Durant will likely have surgery and could likely miss most of next season with the injury.

If so, would mean surgery and KD would miss a lot of next season. A team would still likely sign him to a max contract as he is just that good.

This is a tough blow for Kevin Durant and the NBA as he was expected to make big waves during free agency.