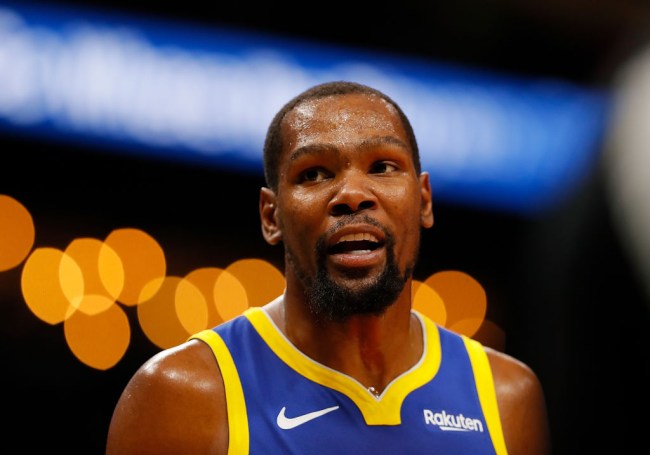 I’d imagine that after you sign with an NBA team, there’s a three-hour seminar with square sandwiches solely dedicated to handling opposing fans making personal attacks at you. The speaker shows all young NBAers a PowerPoint displaying coping mechanisms and reminding players that they will soon be rich and famous and that dickhead with a honey mustard stain dribbling down his chin is probably going through some shit at home. That’s the only way a Malice in the Palace doesn’t pop off every night.

For some players, learning this lesson is a process. Usually these players have experienced minimal success in the league, are on a shitty team, and need to blow off some steam. Kevin Durant is an outlier. A league MVP, Finals MVP, and on one of the best teams ever assembled. What axe does he possibly have to grind? We may never know.

Exhibit A: Two weeks ago, Kevin Durant was fined $25,000 by the NBA for cursing a heckling Dallas Mavericks fan out during a Warriors loss. His exact words: “Watch the fucking game and shut the fuck up!” See below.

This is what happens when you trash talk KD courtside…

Fast forward to Monday night’s game in Atlanta. The Warriors beat the lowly Hawks by 17 and Durant had 28 points on a superbly efficient 10-13 shooting. WHAT AXE DOES HE POSSIBLY HAVE TO GRIND!?

KD told Hawks fans to "Watch the game and shut up." 🤣

Now many fans were quick to point out that KD was joking around with the fan because he followed the jab up with a forced laugh. I am not convinced. Given his history, I think Durant genuinely wanted to verbally spar with the heckling fan and came to when he remembered the hot water it got him in just weeks prior.

Whatever his motive, it birthed some funny reactions:

KD every game to the fans lol pic.twitter.com/cykntxVgP5

Wow, he’d be great teammates with Russell Westbrook. He even kinda looks like the other guy in this video, could just be me tho pic.twitter.com/2Pc3QP2JNP

The Hawks have fans?

You really do learn something new every day.