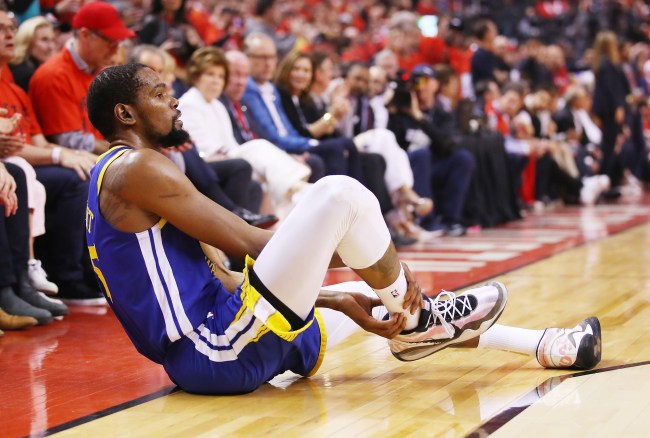 During Game 5 of the NBA finals, Warriors superstar Kevin Durant suffered a devastating Achilles injury weeks after coming back from a calf strain injury that will keep him for next season and could affect his free agency.

After the game, Steve Kerr raised some eyebrows when had he revealed to Rachel Nichols that team doctors told Durant he “couldn’t get more hurt” from his initial calf strain.

Kerr would later confirm that several doctors including an independent one hired by Durant told them that they weren’t worried about KD injuring his Achilles and that if they had known it was a possibility they wouldn’t have let him play.

According to Bleacher Report’s Ric Bucher, Durant isn’t happy with the Warriors after the injury and is beginning to question whether the team misled him about the consequences of coming back with a calf strain.

What I’ve heard, through various places, is that he’s not really happy with how things went down because of the injury,”

“There’s an element of, ‘Was I misled as far as injuring myself coming back and playing and having a catastrophic injury like this coming off a calf strain.”

“We don’t know, definitively, exactly what was said, how much was said, how much he was aware of that, but I can tell you that people in the KD camp, people are running for cover because they don’t want to be holding the bag on who led him astray.”

“Because the bottomline is, what Steve Kerr said, ‘We didn’t think he could get injured worse.’ If Steve Kerr was told that, I’m sure KD was told that. And now he’s looking at the prospect of not playing for, possibly, a year and having his free agency upended. I don’t see how that makes him happier with the Warriors than he was before.”

Bucher’s report confirms Jay Williams’ comments from a few weeks ago about the team telling Durant that he shouldn’t worry about injuring his Achilles during game 5.

This falls on the Golden State Warriors. He got misdiagnosed, I know for a fact that he was told that with a partially torn calf that it unloaded the pressure on the Achilles, that there was no chance that the Achilles could be injured at all, and for that to happen in the first half of a ball game I can’t even fathom that