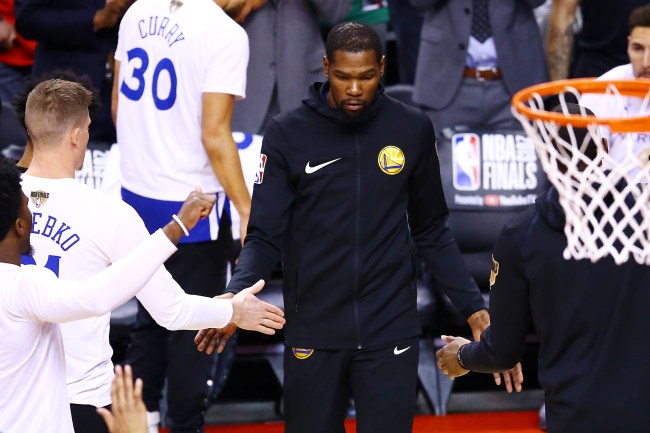 This offseason Kevin Durant decided to leave the Golden State Warriors after playing in the Bay Area for three seasons.

The Warriors didn’t want to lose Durant for nothing and decided that they could figure out a sign and trade for the Nets D’Angelo Russell., who was on his way out of Brooklyn after KD’s signing.

Golden State and Brooklyn have agreed on a sign-and-trade, sending D’Angelo Russell to the Warriors on a four-year, $117M maximum contract, league sources tell ESPN.

The Warriors have acquired All-Star guard D’Angelo Russell, along with guard Shabazz Napier and forward Treveon Graham, in a sign-and-trade transaction that sent free agent forward Kevin Durant and a protected first round draft pick to the Brooklyn Nets. pic.twitter.com/njqdxQvnwx

Apparently, Durant played hardball and squeezed the Warriors to give up a first round pick before signing off on a sign-and-trade.

First, Durant initially balked at being traded for Russell straight up, multiple sources said. He didn’t think it was a fair deal, and in this case, the Warriors had to not just satisfy the Nets, but also Durant.

Leverage was applied by the player, and Golden State had to include a first-round pick before Durant would agree to sign off. The Warriors begrudgingly gave it up and did so with a heavy condition: If the pick falls within the top 20 next year, they don’t have to send it, and instead will only give Brooklyn a second-round pick … in six years. It’s one of the most unusual pick protections the NBA has seen recently.

Also, the Warriors had to take on two players, Shabazz Napier and Treveon Graham to make the trade work. It helped the Nets clear extra space to sign DeAndre Jordan, who is friends with Durant and new teammate Kyrie Irving. Golden State had to turn around and pay Minnesota $3.6 million to take Napier and Graham off its books.