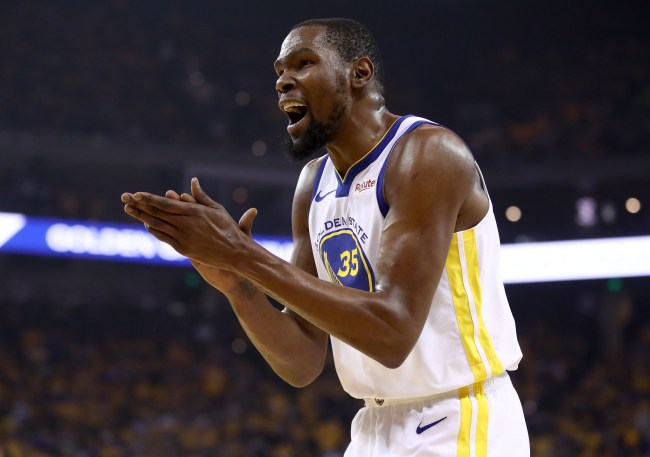 Last night Knicks fans were in pain after the team missed out on the #1 overall pick in the draft.

With the #️⃣3️⃣ pick in our hands, it’s time to take the future. #NewYorkForever pic.twitter.com/Squ86s4VE0

Not all is doom and gloom for Knicks fans, the team still has the #3 picks, two max slots and according to a report from Colin Cowherd Kevin Durant is definitely interested in joining the Knicks next season.

"An NBA veteran player that's very, very connected told me 15 minutes ago: KD to the Knicks is 100% done and he's made calls to other players." — @ColinCowherd pic.twitter.com/1dhaaa7F29

“An NBA veteran player that’s very, very connected—been around this league a long time—told me 15 minutes ago KD to the Knicks is 100 percent done, and he has made calls to other players,

Cowherd isn’t the only one reporting about KD joining the Knicks, ESPN’s Stephen A Smith is being told that there’s a 90-95 percent possibility that the Warriors star will end up in NY next season.

“I’m told it’s a 90 to 95 percent possibility, assurity rather, that Kevin Durant is going to New York—that’s what I’m told,”

“Folks have stopped short of saying it’s a sure thing, but they have used the exact words ’95 percent probability’ that Kevin Durant and Kyrie Irving are coming to Madison Square Garden next season.”

Said it’s BS. No NBA player wants to talk to Cowherd, only has-been NBA players looking for a job.

KD is in the middle of the playoffs trying to win another championship. I highly doubt he's thinking about the Knicks at this current time. pic.twitter.com/NmYOWKz5dW

I highly doubt Durant has made a decision yet but these rumors are going to take over the NBA offseason.