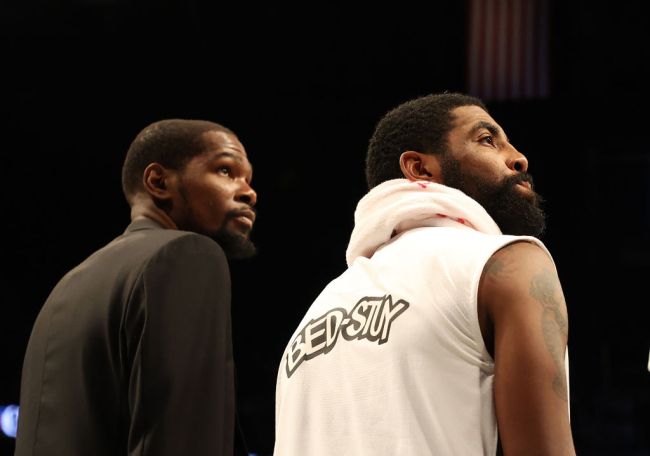 While the discussions about NBA players protesting the national anthem ahead of games haven’t been nearly as loud this season compared to last year inside the bubble, it’s still a talking point that most American sports fans have an opinion on.

The NBA requires players to stand during the playing of the anthem, but that rule has obviously not been enforced for multiple seasons now. Many players and staff members have protested or boycotted the anthem entirely, and that includes Kevin Durant and Kyrie Irving, who most probably didn’t even realize weren’t taking part in the pre-game ceremony.

Matt Sullivan recently wrote the book ‘Can’t Knock The Hustle’ which focuses on the Nets and the NBA season amid a pandemic and protests, and he is the one that took notice of Durant and Irving boycotting the anthem.

In a new long-form piece for GQ, Sullivan shares details about the two Brooklyn superstars skipping out on the anthem. He explains that Irving would leave pre-game warmups early only to be followed by Durant about a minute later.

“After he returned to the court in January, Kyrie Irving began slipping out of pre-game warmups ten minutes before tipoff, disappearing into the shadowy tunnel of an arena — and skipping the national anthem,” writes Sullivan.

“Kevin Durant would silently follow about a minute after Irving, as the cameras cut to commercial and the lights went down. Their teammate DeAndre Jordan joined, too, before the Brooklyn Nets stars hustled back to the huddle in time for starting lineups.”

Sullivan shared videos of the two leaving warmups early throughout the season:

Mid-April: Here's Kyrie walking back to the tunnel. KD followed.

Nets staffer says it's not a bathroom break or extra stretching.

June: Here's DeAndre Jordan hustling back oncourt as the lights come up after the anthem at Game 2 of Nets playoffs series vs. Bucks.

DJ used to stand there and remember a friend who died in a car accident but hasn't been out for The Star-Spangled Banner this year. (9/15) pic.twitter.com/yDTZWShy3c

Sullivan also shared that after one particular game in which Irving wasn’t on the floor for the national anthem, he asked the point guard via direct message that if it had anything to do with “The Star-Spangled Banner.” Irving began typing as Sullivan noticed the ellipses pop up, but ultimately chose not to reply to that question.