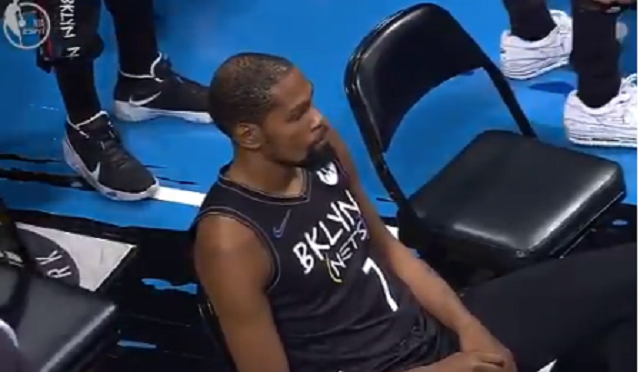 Kevin Durant is not happy with the NBA.

On Friday night, the NBA allowed Durant to play in the team’s game against the Raptors after holding him out due to contract tracing.

Kevin Durant did not undergo further testing between the start of tonight's game and when he checked in, a team source told ESPN. Durant's early absence was related to contact tracing. The person Durant came into contact with underwent further testing, leading to his availability

The league would later pull Durant from the game in the third quarter after he played 19 minutes because the person he came in contact with tested positive with Covid-19.

Per NBA spokesperson, Tim Frank: Kevin Durant has tested negative three times in the last 24 hours, including two negative PCR tests today. However, someone he interacted with this afternoon subsequently had an inconclusive test result return shortly before the game.

NBA: During the game, a positive result was returned for the person Durant interacted this afternoon. Out of an abundance of caution, Durant was removed from the game, and contact tracing is underway to determine if he was in fact a close contact of the positive individual.

Durant was visibly upset after he was told he was being removed from the game due to contract tracing.

Durant's reaction to being told he was going to have to leave the game pic.twitter.com/dzeXe8UX3U

After the game, Durant took to Twitter to rip the NBA over the decision to pull him from the game.

Aye, I don’t know who the fuck it is, but u gotta lock in mane(boosie voice)