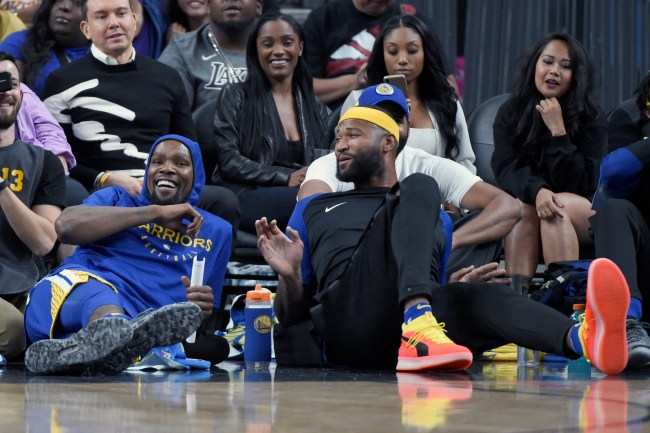 I’m not saying I dislike Kevin Durant, because I respect the guy, but I’ll never forget the somewhat of a b*tch move he pulled by losing a 3-1 lead in the 2016 Western Conference Finals to the Golden State Warriors as a member of the Oklahoma City Thunder, then leaving a couple months later to join, of course, the Dubs. It was the definition of “if you can’t beat ’em, join ’em,” and was pretty pathetic to see a superstar of Durant’s level do something like that. But, hey, that’s just my opinion.

Whether you love, hate or are indifferent about Kevin Durant, one thing that has to be entertaining is seeing the one-time league MVP and two-time NBA Finals MVP getting absolutely posterized by a still-injured, but rehabbing, DeMarcus Cousins during a game of one-on-one. Seriously, it’s as if the basketball gods gave us the best viral hoops video just a few days before Christmas, because I’ve watched this about 11 times now and haven’t stopped smiling the entire time.

Take a look at all its gloriousness for yourselves.

Please, someone, somewhere, pause this video at the exact moment that Kevin Durant’s head is falling towards the floor and Cousins is hanging on the rim. Given how emotionally fragile KD is, there’s no way in hell he wouldn’t have a panic attack at seeing a bunch of fans wearing these in a visiting arena.

Oh, but the awesomeness didn’t stop there, because DeMarcus Cousins actually swatted the sh*t out of Kevin Durant during the same practice, too. It’s like the gift that keeps on giving today.

Apparently, Kevin Durant is crying foul, because, per the NBA on ESPN’s Twitter account, he claimed Cousins traveled. Classic Kevin Durant, am I right?

"I was gonna block that bulls— and you traveled."

KD's commenting "travel" on videos of @boogiecousins dunking on him 😂 pic.twitter.com/tG81eGvt7N

Sure, man, whatever’s going to let you sleep at night, but that whining of yours isn’t going to delete this video from floating around the Internet and giving people like me so much joy. It really is the season of giving, so thanks for giving me this never-ending image, Boogie Claus.