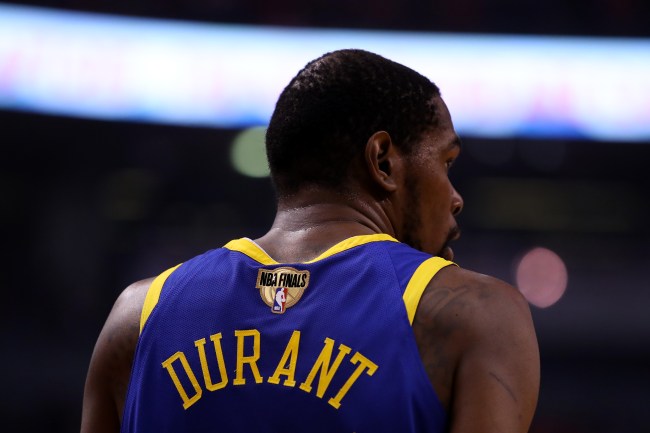 No matter where you stand on the controversial choices Kevin Durant has made in his career, there is no basketball purist in existence that believes his absence from the entire 2019-2020 season while recovering from an achilles tear isn’t a hindrance to the NBA product.

We won’t see KD in a Brooklyn Nets uniform for quite a while, so the former MVP and 10-time All Star has had some time this offseason to reflect on his 12-year NBA career.

In a particularly candid interview with J.R. Moehringer of the Wall Street Journal Magazine,

Durant talks about a wide array of pressing topics like his decision to leave OKC, and his subsequent desire never to return, how he never felt accepted as a Warrior, hating the “circus of the NBA,” his mindset moving into the ladder stagers of his career.

Durant on his decision to leave OKC in 2016 and how the fans treated him like shit, despite his numerous contributions to the community:

People coming to my house and spray-painting on the for sale signs around my neighborhood. People making videos in front of my house and burning my jerseys and calling me all types of crazy names

At his first game in Oklahoma City as a visitor–February 2017–fans yowled for blood and brandished cupcakes, because Durant was supposedly soft. “Such a venomous toxic feeling when I walked into that arena. And just the organization, the trainers and equipment managers, those dudes is pissed off at me? Ain’t talking to me? I’m like, Yo, this is where we going with this? Because I left a team and went to play with another team?”

His mother recalls one particularly appalling piece of video: a Thunder fan firing bullets into a No. 35 jersey. Bullets–after she and Durant and half his extended family relocated to Oklahoma, after the embraced the community, after Durant gave a million dollars to tornado victims.

“I’ll never be attached to that city again because of that,” Durant says. “I eventually wanted to come back to the city and be part of the community and organization, but I don’t trust nobody there. That shit must have been fake, what they were doing. The organization, the GM, I ain’t talked to none of those people, even had a nice exchange with those people, since I left.”

Despite Durant winning two championships and two Finals MVPs in his three years at his next stop, the 30-year-old admits he still felt like an outlier.

He added: “As time went on, I started to realize I’m just different from the rest of the guys. It’s not a bad thing. Just my circumstances and how I came up in the league. And on top of that, the media always looked at it like KD and the Warriors. So it’s like nobody could [give] a full acceptance of me there.”

If you’ve got the time (and the subscription), it’s worth reading the entire Wall Street Journal piece here.