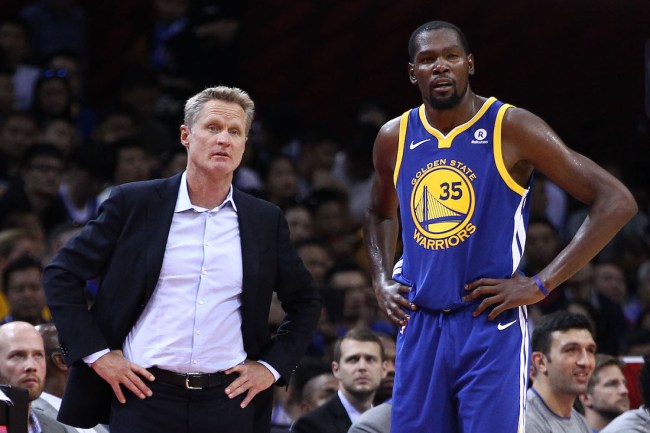 Kevin Durant has been a superstar everywhere he’s gone.

With the Nets, he’s been a two-time All-Star. He’s in the midst of trying to finish out this season and take Brooklyn on a playoff run.

In Golden State, he helped the Warriors bring home a pair of titles. He led the league in scoring four times while a member of the Thunder.

The guy is one of the game’s best, and that will be reflected upon an imminent Hall of Fame nomination following his retirement. But it seems that the sharpshooter is already getting ahead of himself a bit.

On Thursday, Durant made an appearance on The Ringer to talk about some of his past stops in the NBA. He had some bold things to say about his legacy in both Golden State and Oklahoma City.

Kevin Durant believes both the Thunder and Warriors should retire his jersey.

"Every one of these places I played is my home."

Durant believes that both teams should retire his jersey. He says that he was able to elevate the organizations to a new level, and that he deserves the recognition.

“OKC has to retire my jersey. It wouldn’t even be good for the game of basketball if they didn’t. Same with Golden State.”

While no one can deny Durant’s talents on the court, many believe he’s jumping the gun. Especially folks in OKC who are still upset about the way he left.

Check out the NBA reaction below.

Kevin Durant: My jersey should be retired in OKC

The state of Oklahoma: pic.twitter.com/dIkp9en9rd

If any player snaked my organization the way Kevin did and "demand" their number be retired, I would immediately give that number to the team mascot

Kevin Durant had to join a 73 win team to win a title & he thinks he needs his jersey retired? How delusional can someone be? https://t.co/eUCr4ckzrZ

Lol Durant be drinking and speaking again. Bum ain't getting his jersey retired with either. Ditched one franchise and got carried to a ring by another

He’s a Hall Of Fame Player but he never won anything on The @okcthunder, never even made a Finals appearance and left The Thunder to go to The Warriors.

He has won two chips? Man y'all gotta be joking. Why would an organization you never won anything for retire your jersey? What records did he set that mean anything in those jerseys to get his jersey retired? Lebron won chips in three locations and might not get that.

Snaked OKC and superteamed in golden state, doesn’t deserve either

If you have to ask for a jersey to be retired, it’s probably the reason your jersey won’t be retired. https://t.co/zyzoJmce1e

The fact he states this is what’s bizarre

How is it bad for basketball if he doesn’t get some antiquated individual honour? Frankly, It’s embarrassing to be claiming this shot for yourself

Durant is undoubtedly one of the NBA’s best players, and he’ll certainly be honored once his playing days are through. But demanding that the jerseys be retired at this point in his career is just not a great look.