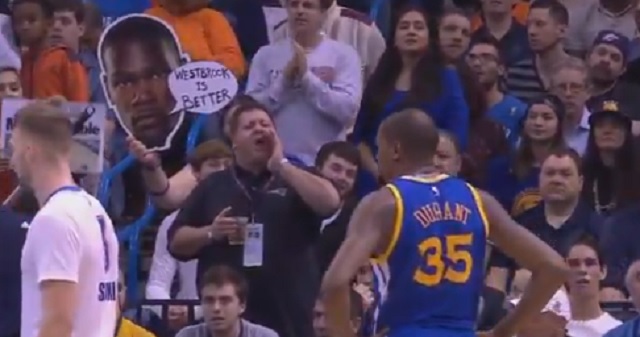 Last night, Kevin Durant made his long awaited return to Oklahoma City after leaving for Golden State in the summer. Durant was welcome by a sea of thunderous fans who berated him all night long.

Durant’s mother, Wanda, was in attendance and described the “vicious” name-calling her son had to endure.

“The most vicious things you could say, they said about my son tonight. It’s hurtful,”
“They called him a snake, a sellout, a b—h,” she said. “It’s just a sad day. I understand that they loved him. I do understand it. But the name calling. The people with the cupcakes on their backs. … It didn’t have to be like this.”

“It’s the people who make it so personal, and attack his character so viciously, like they know him – (all) because he decided to play somewhere else,” . “But then, the bold thing is they’re standing in my face. They’re bold enough to call him a snake and a coward. One guy even called him – I can’t even say it – the p-word. In my face.”

I’m sure Wanda wanted to support her son but I don’t think it was a good idea for her to be there considering everything that went on over the summer.