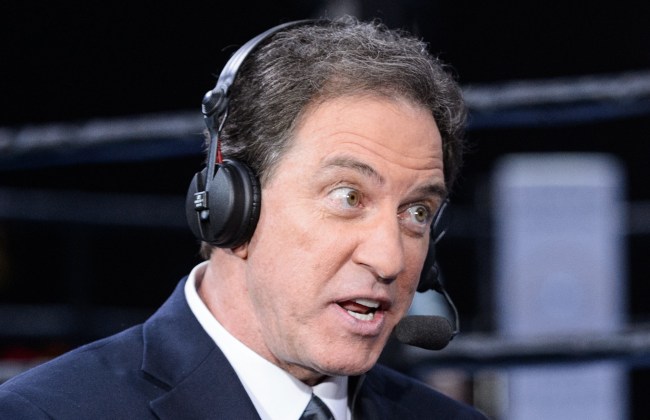 I’ve never sat courtside at an NBA game and probably never will because I doubt I’ll ever be in a position in life to justify dropping four figures to essentially rent a seat to watch sports for a few hours.

There aren’t many sports that let you get up close and personal with the action quite like basketball, and while you might not have to keep your head on a swivel like you have to at a baseball game, there are still some risks that come with sitting courtside—especially when you have a $12 beer in your hand.

One man learned this the hard way last night when the Celtics and the Bucks faced off in Milwaukee in an Eastern Conference matchup. In the third quarter of the game, Marcus Morris rushed after a loose ball and dove into the stands to retrieve it before emerging from the seats with a jersey covered in the beer of a fan he collided with.

It was quite the spectacle and we were lucky enough to have announcing legend Kevin Harlan on the call. After seeing the spill, he launched into one of his vintage play-by-play calls to document the incident in a way only Harlan can.

.@Kevinharlan calling a beer spill is incredible: "MORRIS IS DRIPPING WITH BEER…IT'S IN THE GUY'S HAIR…BEER IS EVERY PLACE!" pic.twitter.com/yPyCQFzzT2

I did a bit of digging but have been unable to confirm if the beer in the cup was Pabst, Old Style, Schlitz, or some other signature Wisconsin brew. Please feel free to reach out to me with any details you might have concerning this very serious investigation.