Vikings’ Kevin McDermott Lost The Tip Of His Finger In Opponents’ Helmet, Returned To Game 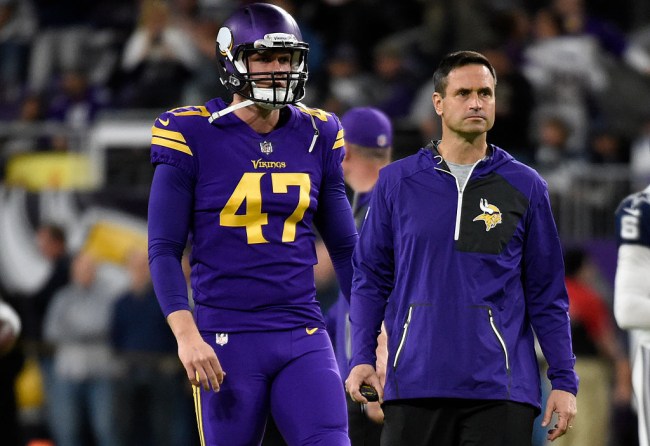 Entertaining Thursday Night Football games are as rare as a sober Buffalo tailgate party. But, courtesy of the football gods, we were blessed with one last night.

The undefeated Los Angeles Rams out-punched the Vikings (1-2-1) 38-31, thanks to the brilliance of Jared Goff. Goff had a historic passing night, throwing for 465 yards, five passing touchdowns, and zero interceptions, becoming just the third quarterback in the Super Bowl era with a perfect passer rating on at least 30 attempts. Goff and the Rams are straight balling right now and solidified themselves as the NFL’s team to beat.

After starting 4-0 in the same span last season, the Vikings are struggling to capture that same magic. But, that’s not due to lack of trying. They’re out here losing fingers.

Vikings long snapper Kevin McDermott was reportedly injured on  Dan Bailey’s 37-yard FG when it got wedged between Rams defensive end Michael Brockers and the facemask of Vikings’ Tom Compton.

I’m told Kevin McDermott lost the tip of his pinky tonight when it got caught in a player’s face mask. He got it stitched up in the game and was able to go back out. The belief is he’ll be able to play through it going forward.

The 28-year-old UCLA product got his pinky stitched up in the locker room and returned to the game. Beast. Hey Kev, you are in good company. Ronnie Lott had part of his left pinky amputated in 1985 when he broke it during a game.

And to think that there is a school of thought out there that thinks football players have gone soft.